Iran sends in the graduates… 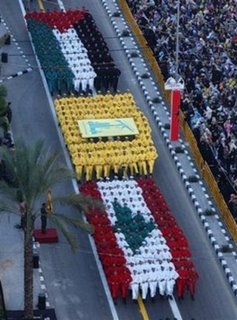 Members of the Hezbollah guerilla group form flags, from bottom to top, Lebanese, Hezbollah and Palestinian, with their colored uniforms as they parade during the annual rally to mark Al-Quds Day, Jerusalem Day, in the southern suburbs of Beirut, Lebanon, Friday, Oct. 28, 2005. (AP Photo/Mahmoud Tawil)

“Oh, Jerusalem, we are coming,” the fighters chanted.

“God willing, we want to liberate Jerusalem,” Fatima Kenaan told Reuters. “Every mother, father and brother will fight against America and its plans.”

Iranian suicide bombers have joined Hezbollah in Lebanon to fight the Zionists according to ADNKronos and Iran Focus:

A spokesman for an Iranian militant group which claims to have 55,000 would-be suicide bombers among its members said on Thursday that 27 of its men have joined Hezbollah militias in Lebanon to fight against Israel. “The first two groups of esteshhadioun (volunteers of martyrdom) have already reached Lebanon,” Mohammad Ali Samadi told Adnkronos International (AKI). Speaking on the phone from the organization’s headquarters in Tehran, Samadi said the militants reached Lebanon through Syria.

The spokesman for the Headquarters for the Glory of Martyrs of the International Movement said its militants in Lebanon were “27 people selected from the 55,000 members who spoke fluent Arabic and have received adequate training to fight beside their Lebanese brothers against the Zionist enemy.”

The spokesman however said the militants would not engage in combat but would “identify Zionist targets and then attack them with actions of martyrdom.”

AllahPundit has the latest on the Hezbollian threats.
The Opinion Journal today has an excellent piece by Fouad Ajami on the price Hezballah will pay for the current calamity.