1,000 Iraqis joined together in an outdoor park to enjoy the World Cup soccer matches on two big screens.

Actually, this is not so unusual for the quagmire… 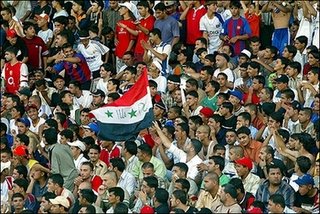 Iraqi fans of al-Zawra football club cheer during a match in May 2006. This year’s Iraqi cup final is to be played in the autonomous Kurdish north for the first time amid safety fears around a tie that threatens to fan sectarian passions.(AFP/File/Ahmad al-Rubaye)

Lawk Salih has the story:

Hundreds of Iraqi soccer fans enjoyed a peaceful show as they watched the World Cup quarterfinals on an outdoor screen in northern Iraq, but not everybody liked what they saw.

About 1,000 people attended the viewing of the matches late Saturday in a public park in Sulaimaniyah, 260 kilometers (160 miles) northeast of Baghdad, as a way to get around electricity shortages and the high cost of satellite TV subscriptions.
“I feel very happy to be here because I have no electricity at home but the public park does,” said 32-year-old Serwan Aziz.

“Because of the large screen I feel as if I were at German stadium.”

Soccer is hugely popular in this war-torn country and many Iraqis pooled their resources to get around the prohibitive cost of access to the Arab Radio and Television, which owns the rights to broadcast the world’s largest sporting event.