Osama Bin Laden, like his late protege al Zarqawi, is planning more attacks on Shiite Muslims in Iraq. Zarqawi hated the Shia Hezbollah Organization so much that he called it a “cover for Israel!” 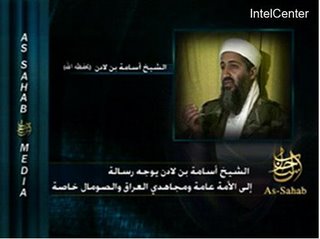 This image released by IntelCenter Saturday shows a photo of Osama bin Laden above the logo and name As-Sahab, al-Qaida’s media production wing, as it appears on a internet message Saturday with a 19-minute audio recording. (AP)

Osama warns the Shiite majority in Iraq and the US of new attacks in his latest tape released today:

A purported audio tape by Al Qaeda leader Osama bin Laden warned Iraq’s Shi’ite majority on Saturday of retaliation over attacks on Sunni Arabs and that his group would fight the United States anywhere in the world.

Bin Laden, making his second Internet broadcast in two days and one of his strongest comments on sectarian divisions in Iraq, also warned the world community to stay out of Somalia, where Islamists have fought their way to power in Mogadishu…

…Bin Laden, a Sunni, said the Sunni Arab minority in Iraq was being “annihilated” by U.S. forces and the Shi’ite majority.

“It is not possible that many of (the Shi’ites) violate, alongside America and its allies, (the Sunni cities of) Ramadi, Falluja, Mosul …. (and) that their areas would be safe from retaliation and harm,” he said.

Later today Sunni terrorists took responsibility for the car bombing in Baghdad that killed at least 60.