Well, besides the Patriot Guard Riders… 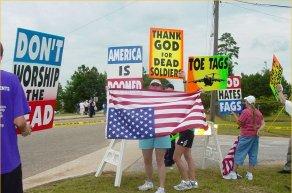 Rantburg offers advice…
Here is one way to put a damper on a bunch of abusive nutjobs who shamelessly protest at US soldier’s funerals:

Now they’re getting something they didn’t ask for: a bill.

The controversial group – who say military deaths are God’s retribution for the country’s failure to condemn homosexuality – planned to demonstrate at the July 1 memorial service for fallen Marine Lance Cpl. Brandon Webb of Swartz Creek.

But they didn’t show up, and now they’ll be charged more than $5,000 for the cost of providing security.

Many states have also used the legislature to stop these awful protesters.