-Honoring the Unsung Heroes in the War on Terror
By the late Secretary of Defense Caspar W. Weinberger and Wynton C. Hall

Is this the perfect read for the 4th of July or what!
I just got my copy in the mail and I am so excited to get started. 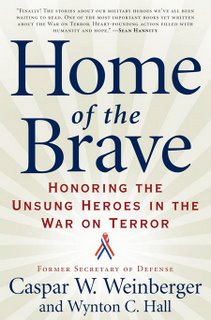 Obviously it is getting some great reviews:

“Finally! The stories about our military heroes we’ve all been waiting to read. One of the most important books yet written about the War on Terror. Heart-pounding action filled with humanity and hope.”
—Sean Hannity on HOME OF THE BRAVE

“HOME OF THE BRAVE stirs the deepest parts of the American spirit. An inspirational portrait of ordinary Americans doing extraordinary things.”
—W.E.B. Griffin, NY Times bestselling author on HOME OF THE BRAVE

“Cap Weinberger’s leadership in rebuilding America’s strength to win the Cold War was marked throughout by a fixation on the individual servicemen –not just to arm them, but inspire them, support them and listen to them. This thrilling book is another of his valuable contributions to honor those heroic men and women.”
—John Lehman, former Secretary of the Navy and member of the 9-11 Commission on HOME OF THE BRAVE

“Regardless of your opinion about the wisdom of America’s odyssey in Iraq, you must read HOME OF THE BRAVE! The profound courage and devotion to duty of our young men and women in uniform is a dazzling counterpoint to the media’s myopic obsession with politics, crime, drugs, corporate greed and celebrity airheads.
“HOME OF THE BRAVE will bring tears to your eyes.”
yes.”
—Stephen Coonts, NY Times bestselling author on HOME OF THE BRAVE

“The authors have assembled a wonderful collection of reports of the extraordinary heroism of America’s servicemen and women in the War on Terror, reminding us not only of the sacrifices of the men and women in uniform and their families, but of the enormous debt the rest of us owe them for the service that “We the People” have asked them to undertake for us.”
—General John W. Vessey, former Chairman of the Joint Chiefs of Staff on HOME OF THE BRAVE

“Riveting sagas of extraordinary heroism in combat by members of our Armed Forces during one of the most difficult, frustrating and critical conflicts in our history. A must read for all Americans who care about the future.”
—General P.X. Kelley, USMC (Ret.) 28th Commandant of the Marine Corps on HOME OF THE BRAVE

“HOME OF THE BRAVE tells Americans stories they need to know about the men who are defending our freedom and security. It will leave you breathless at times—and hopeful about our future.”
—Thomas Fleming, NY Times bestselling author of Washington’s Secret War: The Hidden History of Valley Forge on HOME OF THE BRAVE

Just paging through it and seeing familiar names and faces like Army Sfc. Paul Ray Smith and Marine Sgt. Rafael Peralta among others, I can tell it is going to be a powerful read.

I would already recommend it for the military buffs in your life.

On topic… Musing Minds has a great way to thank the troops this 4th of July.