Please, on this Independence Day, remember our brave men and women sacrifice so much for our freedom our future.

A final look at the funeral of PFC Thomas Tucker this Independence Day weekend. 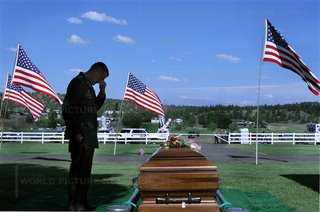 And, on this 4th of July, here are the famous words of Red Skelton on the “Pledge of Allegiance” from a 1969 show.

This is quite possibly comic Red Skelton’s best punchline…

As a schoolboy, one of Red Skelton’s teachers explained the words and meaning of the Pledge of Allegiance to his class. Skelton later wrote down, and eventually recorded, his recollection of this lecture. And he followed it with an observation of his own.

Boys and girls, let me hear you recite the Pledge of Allegiance:

I pledge allegiance to the Flag of the United States of America, and to the Republic, for which it stands; one nation, indivisible, with liberty and justice for all.

Wouldn’t it be a pity if someone said that is a prayer, and that would be eliminated from schools, too?

3,500 showed up at the Memorial Service of PFC Thomas Tucker in Madras, Oregon, where they were forced to hold the service at the fairgrounds! 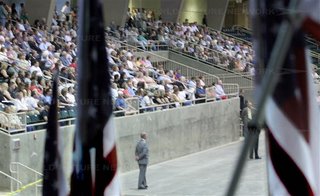 The fairgrounds seats filled in Madras, Ore. on Saturday July 1, 2006 for the memorial of PFC Thomas Tucker, who was kidnapped and killed in Iraq. The bodies of Tucker, 25, and Pfc. Kristian Menchaca, 23, of Houston were found in Iraq on Monday after they disappeared Friday during an attack. A third soldier, Spc. David J. Babineau, 25, of Springfield, Mass., died in the attack. The bodies of Menchaca and Tucker showed signs of being tortured. (WPN)

Michelle Malkin has a wonderful Independence Day roundup.
Wow! Power and Control is having a 4th of July Bikini celebration!
Independent Conservative reminds us that not all people have the freedoms we enjoy.
Slapstick offers a 4th of July video.
TigerHawk reports on those supporting the enemy this July 4th.
Noblesse Oblige shares what America really is.
Betsy has an amazing chart that shows how Republicans and Democrats compare on patriotism.
Lori Byrd has more thoughts on patriotism at Right Wing News.
Alexandra has a beautiful tribute at All Things Beautiful.
Sandmonkey says, “Don’t Feed Them!”
The ACLU wishes everyone a Happy 4th… except Bush.
Musing Minds has the quote of the day!