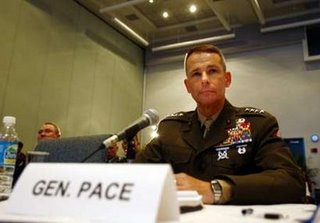 General Peter Pace, Chairman of the Joint Chiefs of Staff, attends a field hearing with the Senate committee on Armed Service in Miami July 10, 2006. (REUTERS/Carlos Barria)

General Pace got choked up at a Congressional hearing yesterday on immigration:

Marine Gen. Peter Pace paused several times as he spoke at a Senate committee hearing on immigration and appeared choked up as he discussed his parents’ hardships and his siblings’ success now.

“My dad came here, sometimes worked three jobs, but the jobs were there for him and the opportunities were there for him,” Pace, the Joint Chiefs of Staff chairman, said at a field hearing of the Senate Armed Services Committee. “There is no other country on the planet that affords that opportunity to those who come.”

Pace also discussed serving in Vietnam next to immigrant soldiers, including the first Marine that Pace said he lost in combat. He said he was “still on active duty today for one primary reason, and that is I still owe those who served with me in Vietnam.”