Brits protest against the slaughter in Lebanon and Gaza,
VIDEO HERE.

One protest organizer says, “The kidnap of Israeli soldiers can never justify the belligerent actions of Israel.”

Thousands of Brits took to the streets today to protest against Israel. 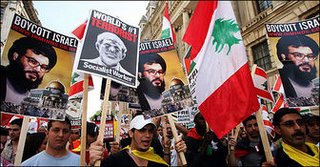 Protestors hold Lebanese flags and placards as they take part in a march through central London against Israeli attacks in Lebanon. (Notice the yellow Hezbollah scarves on the protesters?) 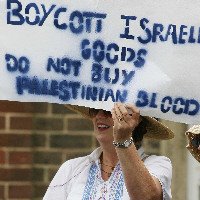 Anti-Israeli protests were held across Great Britain today. George Galloway, gave a rousing speech to the crowd in London:

Figures at the front of the protest included leaders of organisations such as the Muslim Association of Britain and anti-war campaigners like Respect MP George Galloway and writer Tariq Ali.

Mr Galloway made a speech which he said is illegal in the UK because of anti-terror laws designed to outlaw the glorification of terrorism.

He said: “Hizbollah is not a terrorist group and I am here to glorify the Lebanese resistance movement.”

The vast majority of demonstrators, which included men, women and children, shouted slogans such as “Peace for Lebanon” while carrying banners and a Lebanese national flag.

However a handful(?) chanted “Hizbollah” and “Down with Israel”.

Jim Hoft
Jim Hoft is the founder and editor of The Gateway Pundit, one of the top conservative news outlets in America. Jim was awarded the Reed Irvine Accuracy in Media Award in 2013 and is the proud recipient of the Breitbart Award for Excellence in Online Journalism from the Americans for Prosperity Foundation in May 2016.
Democrats Reveal BIG CLUE in the BIG STEAL: Operatives Manufactured Votes from Low Income Voters to Steal the Battleground States -- Start the Canvassing!
DC Comics Drops "The American Way" from Superman's Motto After 83 Years for More Globalist View
MUST SEE VIDEO: Another Fauci WHOPPER: The Effectiveness of the COVID Vaccines Was Another Fauci Distortion Perpetrated on the People
Archbishop Vigano: "Vaccine Victims are Sacrificed at the Altar of Moloch" (VIDEO)
CRINGE: Greta Thunberg Turns to Singing and Dancing to Push Global Warming Agenda (VIDEO)
See more...