A close friend of Shezad Tanweer who says that “Shezad was like a brother to me” claims that several people knew about the London tube bombings before they took place!

Shehzad Tanweer was a British born Muslim who excelled at sports. After he came back to London from a Pakistani Koran school he attended mosque up to five times each day. A picture from London bomber Shehzad Tanweer’s martyrdom video (on right) was released on an Islamic website by Al Qaeda on July 5, 2006, a year after his homicide bombing.

A British newspaper reported today that there was a suspected fifth bomber involved in the “London Tube Blasts” but that he was talked out of the suicide bombings by his family:

A British newspaper on Sunday reported a claim that a fifth man had planned to take part in the suicide bombings of London’s transit network a year ago, which killed 52 commuters and the four attackers.

The Sunday Times quoted an unidentified friend of bomber Shezad Tanweer who said he had learned after the attacks that a fifth man had admitted his intentions to his family and was talked out of joining the group on the morning of July 7.

A unit of London’s Metropolitan police investigating the bombings was aware of the claims about the unidentified man, they have not interviewed him, the newspaper said.

There is more from the original article at the Times Online:

The friend of Shezhad Tanweer, the Aldgate bomber, alleges the fifth man pulled out of the attacks just hours before the terrorists embarked on their mission.

The fifth man, it is claimed, would have used the bombs left behind in a rucksack beneath a seat of the terrorists’ car at Luton railway station.

Although the unused bombs were less powerful than the four devices that killed 52 people, their purpose has never been satisfactorily explained. 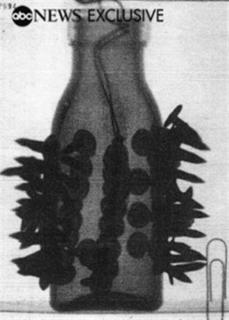 This photo shows an x-ray view of one of the unexploded devices found in the trunk of a car belonging to Shehzad Tanweer, one of the July 7 bombers who attacked the London Underground. (AP)

The alleged fifth terrorist — who has been named to The Sunday Times — is in his thirties and, like three of the bombers, is British-born with Pakistani parents. He is known to Scotland Yard’s 7/7 team, based in Bradford, but has not been interviewed by them.

This is weird. The authorities know of this man but have not interviewed him? That seems very strange.

The friend, who lives close to Tanweer’s home in Beeston, Leeds, learnt of the fifth bomber’s identity after the attacks. He says the man admitted his role to a member of his family. “They [the four suicide bombers] were supposed to meet him but he never turned up. Because they were on a time schedule they left without him. His brother had talked him out of it.”

But, the fact that at least one family and several friends knew of the attacks before the blasts went off and yet no one approached the authorities is very disturbing.