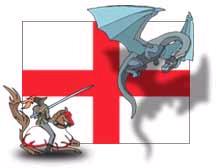 Church of England officials are contemplating giving Saint George the boot from his perch as Patron Saint of England because the figure is too offensive to modern day Muslims:

His dragon-slaying heroics have kept his legend alive through the centuries.

But the Church of England is considering rejecting England’s patron saint St George on the grounds that his image is too warlike and may offend Muslims.

Clergy have started a campaign to replace George with St Alban, a Christian martyr in Roman Britain.

The image of St George was used to foster patriotism in 1940, when King George VI inaugurated the George Cross for civilian acts of the greatest bravery. The medal bears a depiction of the saint slaying the dragon.

However, George has become unfashionable among politicians and bureaucrats. His saint’s day, April 23, has no official celebration in England, and councils have banned the St George flag from their buildings and vehicles during the World Cup.

The saint became an English hero during the crusades against the Muslim armies that captured Jerusalem in the 11th century.

An apparition of George is said to have appeared to the crusader army at the Battle of Antioch in 1098.

His dragon-slaying legend is thought to have begun as an allegory of Diocletian’s persecution of Christians.

Another option would be to give more talks like the one Tony Blair gave yesterday.

Canadian Deborah Gyapong may know where the real problem lies.