Too bad about those tyrants of the world…

Technology makes it harder and harder for them to hide their ghoulish sides from the public.

Even though the MSM ignored the Cuban tyrant’s tyrade at the major economic meetings in Argentina, YouTube has the video up for the world to see! 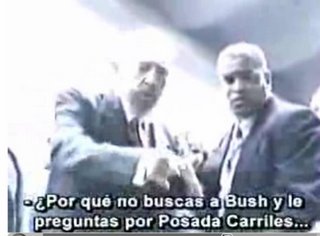 “You’re a mercenary paid by the Bush!”

Newsmax has the story about the US reporter, Cuban-born Juan Manuel Cao, who was attacked by Castro goons at the MERCOSUR (Common Market of the South) meetings in Argentina.

“You’re a mercenary paid by the Bush!” he shrieked. “Who pays you? You’ll probably try to assassinate me with a bomb!”

As Castro yelled and sputtered, his bodyguards pounced on the offending reporter placing him in a choke hold and threatening much worse if he persisted in his impertinence. 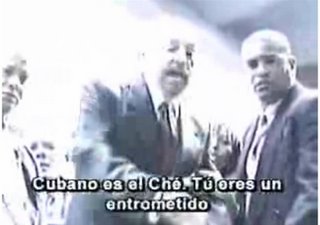 Castro Thugs then beat down the US reporter at the MERCOSUR (Common Market of the South) Conference in Argentina for asking Fidel the wrong question.

YouTube now has the video up via The Real Cuba.
If you speak Spanish, it would be even better, I suppose.

Babalu thought it was good.

Update: (Monday, July 31, 2006) Castro is in bad shape! He has turned over power to his brother.
Val Prieto has started a death watch.
Michelle Malkin, Captain’s Quarters, Allah and Dean’s World have more.