Like Ambassador Bolton yesterday, President Bush called out to Syria to stop the violence in Lebanon. 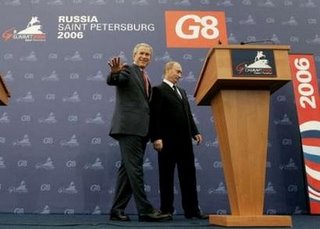 President Bush and Russian President Putin hld a press conference at teh G8 Conference in Strelna, Russia earlier today. The two leaders addressed the current situation in the Middle East. From the White House:

QUESTION: The violence in the Middle East is escalating despite calls for restraint. What can you, President Bush and President Putin, do to stop the violence, stop the fighting, given that there is divisions among allies here about whether Israel is using excessive force?

And the best way to stop the violence is for Hezbollah to lay down its arms, and to stop attacking. And, therefore, I call upon Syria to exert influence over Hezbollah…

PRESIDENT PUTIN: I agree with the premise that it is absolutely unacceptable to try and reach this or that goal, including political goals, through the use of force, through abductions, through carrying out strikes against an independent state from the territory of another state. This is all true. And in this context we consider Israel’s concerns to be justified.

At the same time, we work under the assumption that the use of force should be balanced. And, in any case, bloodshed should stop as soon as possible. This should be the point of departure for the efforts to create an enabling environment for the resolution of the entire set of problems. Escalation of violence, in our opinion, will not yield positive results.

At any rate, we share the approach with President Bush. We will take every necessary effort on both sides, and I hope that our G8 colleagues will support us…

On Friday, Syria announced that it would back Hezbollah (and Lebanon) against Israeli attacks.

** Freedom for Egyptians says the ultimate target is Damascus.
This is a great read!

And, this may exlain (or maybe not?) why the Left is ignoring the war.

Little Green Footballs and Pajamas Media continue to have excellent and up to date war coverage.