Al Qaeda members in Saudi Arabia say they will go down fighting!

Crossroads Arabia reports this news from The Kingdom:

Al-Qaeda in Saudi Arabia has rejected a renewed amnesty offer from King Abdullah to Islamist militants who are willing to turn themselves in to the authorities, according to a statement that has appeared on the Internet. “We will not surrender. It is either victory or martyrdom,” said a statement signed by the group and posted to a web site frequently used by Islamic militants. 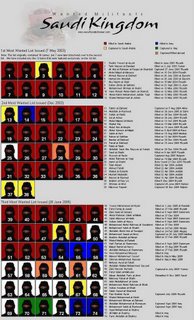 Obviously, the odds are against these terrorist thugs…

56 of the top 58 most wanted al Qaeda linked terrorists in the Kingdom of Saudi Arabia have been killed or captured!

You won’t see that in an Al Qaeda recruiting film!

Sadly, for the terrorists, the numbers worldwide do not look much better.

More bad news for Al Qaeda:
From a previous post and taken from Security Watchtower.

Security Watchtower has the source links.
The Al Qaeda mambers do have more time to reconsider their decision.