Still bamboozled, the BBC continues to question, “Were 7/7 bombers linked to al-Qaeda?”

I don’t usually do this… and I know I’m going out on a limb here…
But, my answer is – Yes! 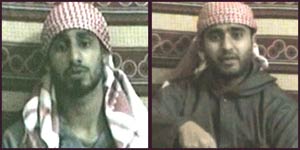 Left: Shehzad Tanweer in the video shown today, with a similar backdrop to the Mohammad Sidique Khan video broadcast in September. (Times)

I think what gave it away for me was the Al Qaeda video released this week that was reported on the BBC showed London Tube bomber Shehzad Tanweer pledging support to jihad. This was similar to the previously released Al Qaeda video with another 7/7 tube bomber, Mohammad Sidique Khan, released by Al Qaeda in September and reported by the BBC.

It also helped that Al Qaeda’s #2 Al Zawahiri was included in the video reported by the BBC, yesterday. That helped me a little in forming my opinion.

Al-Zawahiri also praised the London bombings before in his own video release reported by the BBC.

Also, I took into consideration that in Shehzad Tanweer’s last will and testament (posted on a radical Islamist website) he gives praise to “Sheikh Osama Bin Laden, Dr Ayman al-Zawahri and Abu Musab al-Zarqawi.” That helped some.

And, the fact that the bombers went to Pakistan where the videos were produced was included in my decision.

Now, I realize I may not have a whole lot of information at this point…
But, I’m going to stick with my gut feeling and say that Al Qaeda was involved in the 7/7 bombings.