Oh, how the liberal media wishes that Operation Iraqi Freedom would become the Ghost of Vietnam!

And, Oh, how the liberal media is pushing ‘Iraq as Vietnam’ despite the facts! 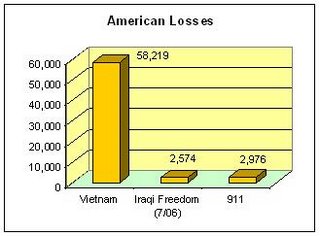 Iraq is definitely not Vietnam!*

But, one thing that is familiar between the two wars is that the democrats and their mainstream media are actively pushing for retreat and loss. The stakes this time are much higher than they were back in the early ’70’s. If you watch the movie “Obsession” about the war declared on the West by Radical Islam you would understand the seriousness of the situation.

And, as a Gallop poll showed yesterday, through continual bombardment of negative reporting from Iraq, the media is making gains in the propaganda front. In fact the work of the liberal media has been so successful that a majority of the American public is bamboozled into feeling like the the War in Iraq is a quagmire, a money pit, a complete failure, one of America’s tragedies… when nothing could be further from the truth!

Despite the fact that a democratically elected government is in place, successful elections have occurred, rebuilding projects are in progress and completed, 14 out of 18 provinces see little to no violence, Saddam has been captured and tried, more terrorist goons are killed or captured every day, the main religious leaders are calling for peace and cooperation, etc…

“52% of adult Americans want to see all U.S. troops out of Iraq within a year, with 19% advocating immediate withdrawal. In the summer of 1970, Gallup found that 48% wanted a pullout within a year, with 23% embracing the “immediate” option. Just 7% want to send more troops now, vs. 10% then.”

How the liberal media can compare Iraq to Viietnam is beyond logic or reason. Nothing could be further from the truth!

Here is one HUGE difference between the War in Iraq and Vietnam.

Karl Rove was correct today to blast the media for its corrosive role in politics and world events.

If there is an information reformation going on today as Hugh Hewitt suggests in BLOG, it hasn’t taken hold yet. Despite Rathergate and the disclosing of national security secrets by the New York Times and Washington Post the movement has a long ways to go.

* The Vietnam numbers did not include secret service fatalities. The US losses were through July 10, 2006.

In related news… Prairie Pundit notes how, despite Murtha’s assertions, residents feel safer now that US troops have returned to Baghdad.

Previously:
Charting the Iraq War
So, How Bad Are Things in Iraq Really?
Iraqi Freedom Bests Previous US Wars Where it Counts
Harry Reid Describes the Force Behind Iraqi Barbarism… Bush
“Waiting to Get Blown Up” in Iraq Would Be a Long Wait