Members of the Civil Rights Defence Organization protested outside of the Melbourne Court where 13 accused terrorists were being tried yesterday, 7/25/2006. 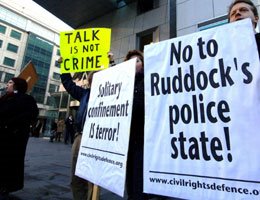 The Aussie civil rights protesters rallied against Howard government’s dreamed up anti-terror laws that they say are “unjust and an attack on human rights.”

But, as the Gulf Times reports, the 13 men were inspired by Osama bin Laden and one of the suspects in the Aussie terror trial even attended Al Qaeda explosive’s school:

Thirteen men arrested in Australia’s largest counter-terrorism operation yet were strongly inspired by Osama bin Laden and were planning a terrorist attack, a court heard yesterday. Crown prosecutor Mark Dean said one of the men, Shane Kent, underwent weapons and explosives training at Al Qaeda’s Al Farooq camp in Afghanistan and was committed to jihad.

Dean described another of the 13 men, cleric Abdul Nacer Benbrika as the spiritual leader of the group and recounted an alleged conversation in which he urged others to wreak havoc.

“If we want to die for jihad we have to do maximum damage, maximum damage, damage to their buildings and everything and damage their lives. Just to show them that’s what we have been waiting for,” Dean quoted the cleric as saying…

…An undercover agent who infiltrated the group discussed details of blowing up buildings with Benbrika and had accompanied the cleric to a location in north-east Victoria state to witness a trial explosion, the prosecutor said.

The agent had spent seven months inside the group from September 2004 and would give evidence at the hearing.

The Civil Rights Defence Organization… is a group of individuals concerned about the Australian government’s efforts to destroy some of our most basic civil and human rights under the pretext of the ‘war on terror’.