“All the conditions for the removal of the Zionist regime are at hand,” Ahmadinejad told an Arab Conference of Iraqi Neighbors meeting Saturday. 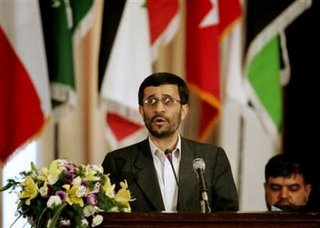 At a regional conference in Tehran on security in Iraq, Iranian President Mahmoud Ahmadinejad called for the removal of the “Zionist Regime”:

A regional conference on security in Iraq opened in Iran with President Mahmoud Ahmadinejad calling on Islamic countries to mobilise against Israel and “remove” the “Zionist regime”.

“The basic problem in the Islamic world is the existence of the Zionist regime, and the Islamic world and the region must mobilise to remove this problem,” the president said at the opening of the two-day conference.

“Today there is a strong will… to remove the Zionist regime and implement a legal Palestinian regime all over Palestine. The continued survival of this regime (Israel) means nothing but suffering for the region,” Ahmadinejad said.

“The biggest threat today for the region is the existence of the fake Zionist regime,” he added, before going on to attack Israel’s supporters.