Most people are not interested in what is taking place in Zimbabwe. 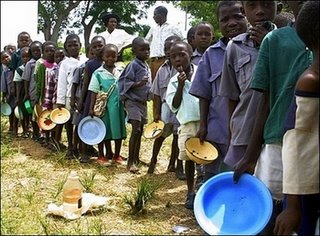 A letter from Collen Makumbirofa for Zimbabwe:

While South African ruling politicians are permitting mass murder of children, their counterparts in Zimbabwe are deliberately starving millions into submission.

Some people can refuse that genocide is taking place in Zimbabwe. The international Criminal Court (ICC) have accepted the definition of genocide as “the intention to destroy in whole or in part, a national, ethnically, racial or religious group, as such”

Some leading authority have defined genocide as “the deliberate killing of people based on their ethnicity, nationality, race, religion, or (sometimes) politics, as well as other deliberate action(s) leading to the physical elimination of the above categories.”

The media report that, thousands are dying every day due to starvation and diseases on contrary food & medical aid is being denied entry into Zimbabwe. In 2002 the Catholic Institute for International Relations in its report has stated that, “Two thousand people per week were dying from HIV/AIDS in 2002 and the figure is now more than 3,500. Life expectancy has dropped to 35 years from 65 in 1990.” Inflation is over 1,000%.

The government of Zimbabwe has destroyed means of live hood for millions by invading productive farms, embezzling public funds, destroying informal traders, destroying companies, and destroying homes for millions of people. Murder is murder even if the government kills through denying food aid and medical assistance. The reason is that people no longer want the ruling government.

Didymus Mutasa, the administrative Secretary of Mr. Mugabe’s ruling Zanu Pf, has declared:
“We would be better off with only six million people… who support the liberation struggle… we don’t want all these extra people.”

What do you think there are doing to those extra millions they do not want? Killing them. How? Starving them to death. Depriving hospitals of medicine. Forbidding food aid into the country. Torturing them and imprisoning them. Assassinating many. The government of Zimbabwe is actively doing this.

Most people are not interested in what is taking place in Zimbabwe. Most Churches (Zimbabwean and South African) are silent in face of the genocide-taking place in Zimbabwe. Genocide is genocide even if the government use cunning means like starvation through destroying means of live hood and refusing food aid into the country. In these dark times South African and Zimbabwean Churches have an obligation to expose the genocide-taking place and to teach people to pray accordingly. I don’t understand why Churches and Christians are not interested in rescuing those who are being lead to death in Zimbabwe.

Mobilise prayer for the oppressed in Zimbabwe. Send relief aid: food, medicine, blankets and clothes for the starving. We will do a wise and prayerfully distribution to those who are in desperate need. Write letters to your politicians urging them to act and save lives in Zimbabwe. One person can make a difference.
Please act now, time has run out.

“Rescue those who are being lead to death.”

Namibia announced today that Zimbabwe is a role model for land reform.