Sadly, only about 12 people joined Al Sharpton today at his protest against the Ameren UE electrical company in St. Louis,
KMOV VIDEO HERE

Al Sharpton really needs to do a better job race/poverty hustling…
This was a waste of frequent flyer miles. 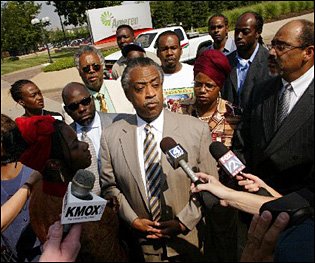 The Rev. Al Sharpton, center, talks with the media outside of Ameren Corp. headquarters in St. Louis on Tuesday. (Post Dispatch)

It was hardly worth Al’s trip to St. Louis.

Sharpton was here to protest against the electric company after the worst storm in nearly 100 years hit St. Louis and left many without power:

The vocal group called for a rollback of Ameren’s scheduled rate hike.

Sharpton was brought in for the protest and departed a short time later. While he was on the scene he accused Ameren of avoiding minority neighborhoods.

“I’ve heard from several places since I have been here that the higher income, the more immediate the response, and there has not been a fair and equal response to communities of working people and of color,” he said.

Sharpton declined to offer any specifics relating to his charges.

But, from the regional map you can see that the electric company was hardly selective in their response to the crisis. 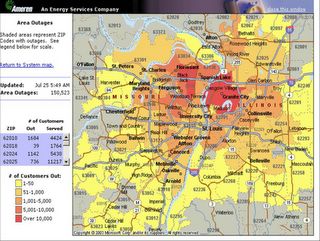 After the first violent storm ripped through the region last Wednesday night, 154,000 were still without power in the St. Louis region as of Monday night.

Ameren UE responded to the baseless charges by Sharpton:

“Nothing could be farther from the truth. We have put more workers in minority neighborhoods because they have sustained greater damage,” she said.

In a reader poll offered at the KMOV website, 3% of readers agree with Al while 97 percent of readers disagree.
It looks like Al picked the wrong battle here!