For the first time, Al Qaeda claims that it is now active in Kashmir and is calling Muslims in India to jihad! 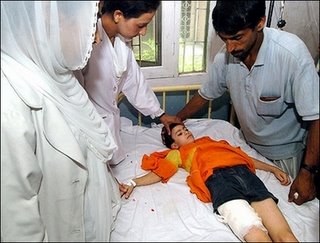 An injured Kashmiri girl is treated by doctors at a Srinagar hospital following a grenade attack. Eight tourists were killed and 39 people injured in a series of grenade attacks targeting holiday areas in the main city of revolt-hit Indian Kashmir, police said.(AFP/Sajjad Hussain)

An Al Qaeda member made a call from Kashmir praising the Mumbai bombings and calling Indian Muslims to jihad. Police were tracing the call:

A man claiming to represent al-Qaida in Kashmir said the terror network had set up a wing in Kashmir and appealed to Indian Muslims to take up jihad, an Indian news agency reported Thursday. An official said the government said it was taking the claim “very seriously.”

The man, who identified himself as Abu al-Hadeed, told Kashmir’s Current News Service that “who so ever has carried out the attacks in Bombay we express our gratitude and happiness.”

As word of the announcement spread, a senior intelligence official in Kashmir said the call had been placed from a local landline phone that authorities were trying to trace.

“Our immediate effort is to locate the caller and ascertain the authenticity of the claim,” said the official, who spoke on the condition of anonymity because he was not authorized to speak with the media. “The government is taking it very seriously.”

There have been allegations that Islamic militants fighting to wrest predominantly Muslim Kashmir from India have ties to al-Qaida, but Thursday’s statement is the first time Osama bin Laden’s network has claimed to have spread to the Indian territory.

“We appeal to Muslims in India to fight for freedom and Islam and choose jihad as their way to achieve freedom and establishing Islamic ways,” al-Hadeed was quoted as saying. He added the Bombay bombings “are a reaction to what is happening to the minorities, especially Muslims in India.”

The group is calling itself, Al-Qaeda Jammu and Kashmir, was formally launched on Thursday:

The amir of Al-Qaeda Jammu and Kashmir, Abu Abdul Rehman Ansari, has appreciated those who took part in the Mumbai blasts and expressed happiness,” the purported spokesman for the group told Current News Agency in a phone call.

He said the group has been formally launched on Thursday. The claims could not be independently verified.

“(Ansari) has said the blasts were the result of Indian oppression and repression of minorities, in particular Muslims,” the spokesman said.

He said Ansari had appealed to Muslims in India to “adopt path of jihad for freedom and Islam.”

Although nothing is proven at this time, Certain intelligence experts claim that the Mumbai bombings have the markings of a larger group like Al Qaeda.