Watch this Associated Press video on the bogus excuse for the slaughter of our soldiers and be very enraged!!! 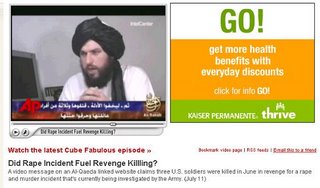 ** More on these bogus Al Qaeda claims below.
The only thing missing from the AP report on the slaughter of our soldiers is a nasheed playing in the background!

Al Qaeda boasts of its slaughter of US soldiers…
“The nearly five-minute film shows the horribly mutilated bodies of the two soldiers, who had had their throats cut. The head of one of them was held high by an armed man, like a trophy. The head of the other was being stamped on by another armed man.”

The Jawa Report has the video and images posted from the video.

It is not clear from the video if the soldiers were alive or already dead before the decapitations.

AL Qaeda releases video of the two kidnapped and slaughtered US soldiers:

The Iraqi branch of Al-Qaeda put on the Internet a video showing the mutilated bodies of two US soldiers kidnapped in June and executed to “avenge” an Iraqi woman raped near Mahmudiyah south of Baghdad.

“Here is a film on the remains of the bodies of the two American soldiers kidnapped near Yussufiyah (south of Baghdad). We are showing it to avenge our sister who was raped by a soldier belonging to the same division as these two soldiers,” said a preamble by the Mujahedeen Al-Shura Council, an Al-Qaeda dominated alliance of armed Sunni groups in Iraq.

When guerrillas learned of the rape, “they repressed their sighs to avoid news of the affair spreading but they swore to avenge their sister,” the council said on its usual website.

“Praise God, they captured two soldiers from the same division as this vile crusader. Here are the remains … to rejoice the hearts of the faithful,” the statement said.

The Jawa Report includes this about the Al Qaeda film:

The video bears the logo of The Mujahadin Shura Council and al Qaeda in Iraq. Contrary to reports by al Qaeda and in the MSM, the video appears to show that the two soldiers were already dead before at least one of them was beheaded.

After a brief introdcuction with an image and the voice of Osama bin Laden, the video shows the two dead soldiers lying on a bridge. Both are already dead.
One of the men has already been beheaded, the other man is dead. An al Qaeda member holds the severed head of one of the dead soldiers.

One of the two soldiers appear to have been shot, the other has multiply wounds but appears to have also been hit by an explosive.

The video also blurs out one of the dead men’s genitels, apparently al Qaeda believes showing that would be over-the-top.

** As if the slaughter of our brave soldiers was not bad enough… What is truly outrageous is the way the media is pushing this bit of Al Qaeda propaganda!

The Mujahadin Shura Council did not mention the suspected rape/murder of the Iraqi woman in the message released on June 20 when the soldiers went missing. It was after the Western media reported the indictments of US soldiers for the rape/murder of an Iraqi woman that Al Qaeda used this as an excuse for the slaughter of our soldiers. And, the US media unquestioningly reprints this terrorist propaganda! Disgusting!

The only thing missing from today’s media reports on the slaughter of our soldiers is a nasheed playing in the background!

More: AllahPundit has this:

The animals bank some propaganda points. Rusty e-mails and points to this passage in the Times, of all places, calling B.S. on them:

It is questionable whether the soldiers were actually killed out of revenge. Iraqis around Mahmudiya, where the rape and murder took place, believed at the time that the girl and the other three victims — her younger sister and parents — were killed by other Iraqis in sectarian violence, according to the mayor of Mahmudiya and American military officials. The mayor said the possible involvement of American soldiers only became apparent on June 30, when the American military announced it had opened an investigation into the crime.

Outside the Beltway posted other sites where the video can be downloaded.
Ace explains how AQ is dealing with the Geneva Conventions.
Musing Minds has thoughts on Al Qaeda’s gruesome tactics.

Please remember the families of these soldiers this evening.

Previously:
Al Qaeda Says It Is Holding Missing Soldiers
Pray For Pfc. Thomas Lowell Tucker & Pfc. Kristian Menchaca
No Gettysburg Address Re
quired, But Say Something!
“Our Son Died for the Freedom of Everybody in the United States”
After Mutilation, Fingerprints Helped ID Soldier’s Remains
Russia Negotiating with Terrorists who Slaughtered US Soldiers
Moscow negotiates with GIs’ murderers –World Net Daily
What Really Happened to Privates Menchaca and Tucker
Westboro Demons Will Protest at Tucker & Menchaca’s Funerals!
Iran Admits to Links with Al Qaeda Group Who Killed US Soldiers