It was a sad time for Iranian President Mahmoud Ahmadinejad this past month as he witnessed the passing of his father:

The father of Iranian President Mahmoud Ahmadinejad passed away Tuesday morning at the age of 82, it was announced here Tuesday. According to a report by the Presidential Office’s Media Department, the late Ahmad Ahmadinejad died of heart failure at Martyr Chamran Hospital this morning. A funeral procession for the president’s beloved father will be held Wednesday morning.

But as Azarmehr notes… It was probably no worse than the day 13 years ago when it was first announced that Mahmoud Ahmadinejad had lost his father!

At least he had his communist friend Hugo Chavez to cheer him up last weekend when they crashed the African Summit. 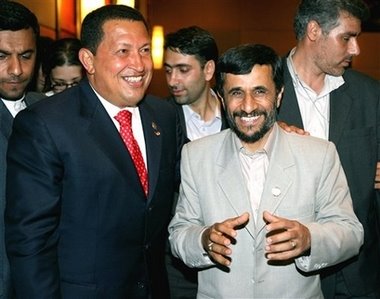