Or Does It Explode blog reports that there are 80,000 Sri Lankans trapped in Lebanon, a majority of them employed as housemaids.

Many of these maids have already faced violence in Lebanon… 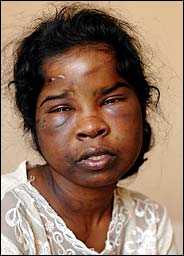 Thangarasa Jeyanthi, 20, said she was beaten daily while working as a housemaid in Lebanon. She returned with burn marks, cuts and bruises and was put in a government shelter. (New York Times)

The BBC reports that there are 80,000 Sri Lankan maids trapped in Lebanon and unable to get home:

In a small town in southern Lebanon, a group of maids have been trapped by the destruction of the local infrastructure and employers who they say refuse to let them leave.

Padma, 22, described her terror to the BBC News website. “We tried to go away, but the employers won’t let us. We have been so very scared,” she said.

“They won’t give us our passports. They want me to continue working here and they won’t pay me the rest of my salary if I go now. I have been working for one-and-a-half years but I have only got three months’ pay.”

The women have been desperate to get to the Sri Lankan embassy in Beirut and return home.

Fellow domestic helper Menika, 21, said that her employers were withholding her passport because they didn’t want her to make her own way to Beirut, fearing for her safety.