Up to 3,000 attended the public Memorial Service this afternoon in Madras, Oregon for Army Pfc. Thomas Tucker who along with Pfc. Kristian Menchaca was slaughered by terrorists after they were kidnapped at a check point in Iraq. 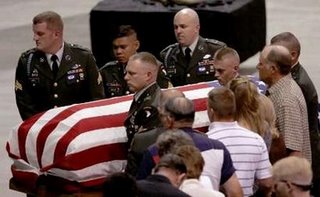 The family of slain U.S. Army Private First Class Thomas Lowell Tucker, his father Wesley (R, in tan shirt), his mother Margaret (at left of Wesley) and his sister Tayva, watch as the casket passes at a memorial service for Tucker in Redmond, Oregon, July 1, 2006. Tucker was captured and brutally killed by insurgents in Iraq. (REUTERS)

The public memorial service for Army Pfc. Thomas Tucker of Madras was moved today into the main exposition hall at the Deschutes County Fairgrounds in Redmond to accommodate up to 3,000 people expected to gather.

About 150 law enforcement personnel and emergency responders from agencies throughout Deschutes, Crook and Jefferson counties were working at the service to direct traffic and control the crowd.

Dozens of volunteers from the Redmond Veterans of Foreign Wars post and its Ladies Auxiliary handed out 3,000 bottles of donated water as people arrived for the memorial. They also offered drinks and sandwiches to 250 family members, police and military guests. 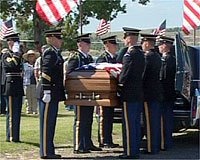 (kgw.com)
“We’ve had almost every grocery story in Central Oregon donate,” said Dianne Guthrie, a coordinator with the Ladies Auxiliary. “There’s been a tremendous coming together of all of Central Oregon to rally around this family.”

As family, friends and supporters entered the hall, bouquets of flowers sat by a lectern and piano and a black hearse was parked on the floor. 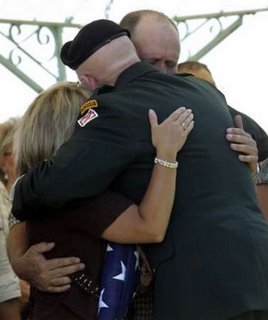 Margaret and Wesley Tucker, the parents of slain U.S. Army Private First Class Thomas Lowell Tucker, are consoled after being presented with the flag from the casket by Brigadier General Gregg Martin. (Reuters)

Eight Patriot Guard riders will be at the funeral:

A program for the memorial included a photo of Tucker on the front and a poem inside called “The Eagle”:

The eagle now is truly free
Soaring through eternity
He found his wings and began to climb.
He was yours for but one moment in time.
You cradled him upon your breast
and nurturing him
You were truly blest.
You gave him values beyond measure
He gave you memories to treasure.
And now he soars happy and free
Still yours through all eternity.

Blackfive has the 502nd Infantry Memorial Service video for the three soldiers lost in this attack in Iraq.

Cliff May wonders about this silence over this brutality.

Much more on Private Kristian Menchaca of Houston and Private Thomas Tucker of Oregon here here, and here.