** Songs…
Dr. BLT has a new song out titled “No Tears for Zarqawi”
(No tears… Unless of course, your terrorist address is listed on Zarqawi’s hard drive. Then you may be crying for your own hide.)

Here is an audioblog clip of “No Tears for Zarqawi”

And, here is the the complete download of the release by Dr. BLT.

** Tributes…
In the past week, Iraqi newspapers carried headlines showing Aljazeerah, the Palestinians and Hammas mourning the death of Zarqawi the martyr… The Iraqis were not amused with this homage that fellow Muslims were paying to the killer of so many innocents.

Today, CNN posted a picture of the new Al Qaeda Iraqi Leader.
He looks like a nice enough fellow. 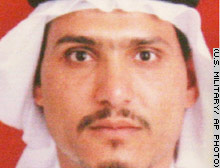 Take a good look at the new no-name leader, Abu Ayyub al-Masri.
After all, you don’t know how long he will be sticking around.

** Treasure…
The US and Iraqi forces have recovered a treasure of documents and information on the terrorists in Iraq since the death of Zarqawi:

U.S. and Iraqi forces killed 104 insurgents in hundreds of raids since terrorist leader Abu Musab al-Zarqawi was slain last week, and the American death toll in the war in Iraq hit 2,500, the U.S. military said Thursday.

American and Iraqi forces have carried out 452 raids since the June 7 airstrike on al-Zarqawi, and 104 insurgents were killed in those actions, said U.S. military spokesman Maj. Gen. William Caldwell.

The nationwide raids led to the discovery of 28 significant arms caches, Caldwell said.

He said 255 of the raids were joint operations, while 143 were carried out by Iraqi forces alone. The raids also resulted in the captures of 759 “anti-Iraqi elements.”

Authorities said a document found in al-Zarqawi’s hideout that includes a blueprint for trying to foment a war between the United States and Iran and also appears to show that the insurgency in Iraq is weakening.

The document said the insurgency was being hurt by the U.S. military’s program to train Iraqi security forces, by massive arrests and seizures of weapons, by tightening the militants’ financial outlets, and by creating divisions within its ranks.

“Generally speaking and despite the gloomy present situation, we find that the best solution in order to get out of this crisis is to involve the U.S. forces in waging a war against another country or any hostile groups,” the document said.

“We mean specifically attempting to escalate the tension between America and Iran, and American and the Shiite in Iraq,” it quoted the documents as saying, especially among moderate followers of Grand Ayatollah Ali al-Sistani, the most influential Shiite cleric in Iraq.

Good news for Iraq, not so good for Zarq fans!

Michelle Malkin has her own music tribute today.
And HotAir slams the Hadji Girliemen.
Smash at The Indepundit says to keep an eye out for grim milestones today.