Yes, we all do… but the odds are not good. 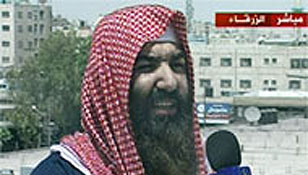 The KavKaz Center is reporting this news from Jordan:

Abu Musab al-Zarqawi’s older brother says the family had anticipated the death of the al-Qaeda in Iraq leader for some time.

“We anticipated that he would be killed for a very long time,” Sayil al-Khalayla told The Associated Press on Thursday in a telephone interview from al-Zarqa, the poor industrial town that al-Zarqawi called home and from which he derived his name.

“We expected that he would be martyred,” he said, in a low voice, signalling his grief over the death of his brother, whose real name is Ahmad Fadhil Nazzal al-Khalayla.

“We hope that he will join other martyrs in heaven.”

Well, it is best to be positive… but don’t get your hopes up.

And, Aljazeera reports on a conspiracy:

Speaking to Aljazeera on Thursday, Abd al-Bari Atwan, editor of Al-Quds Al-Arabi, a London-based Arabic newspaper, said he thought the killing of al-Zarqawi was timed to boost the new Iraqi prime minister.

“I think the Americans planned for this operation a long time ago, which helped them find information about al-Zarqawi’s location and lay siege to it.”

“For sure, Prime Minister al-Maliki, who faces difficulties in forming a national unity government, knew what would happen. Which is why he chose this day to announce the ministers of defence, interior and national security, so that it would coincide with the the killing of al-Zarqawi, which they thought would be a great victory.”

A Hamas spokesman said that Al Zarqawi’s death will only increase the number of jihadists in Iraq.