But, the New York Times does not tell you this.

But, that did not fit in too well with their “tortured innocents at Gitmo story” today so the New York Times left that part out. 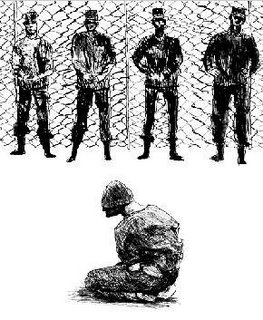 I WAS released from the United States military’s prison camp at Guantánamo Bay, Cuba, in July 2004. As I was about to board a plane that would take me home to France, the last detainee I saw was a young Yemeni. He was overwhelmed by emotion.

“In your country, Mourad, there are rights, human rights, and they mean something,” he said. “In mine they mean nothing, and no one cares. So when you’re free, don’t forget what you’ve been through. Tell people that we are here.”

I now know that this Yemeni was not among the three prisoners who committed suicide at Guantánamo last weekend, but since then his words have been echoing in my head. Although I’m now a free man, the shared pain endlessly takes me back to the camp.

In the early summer of 2001, when I was 19, I made the mistake of listening to my older brother and going to Afghanistan on what I thought was a dream vacation. His friends, he said, were going to look after me. They did — channeling me to what turned out to be a Qaeda training camp. For two months, I was there, trapped in the middle of the desert by fear and my own stupidity.

As soon as my time was up, I headed home. I was a few miles from the Pakistani border when I learned with horror about the attacks of 9/11. Days later, the border was sealed off, and the only way through to Pakistan and a plane to Europe was across the mountains of the Hindu Kush. I was with a group of people who were all going the same way. No one was armed; most of them, like me, had been lured to Afghanistan by a misguided and mistimed sense of adventure, and were simply trying to make their way home.

I am a quiet Muslim — I’ve never waged war, let alone an asymmetrical one. I wasn’t anti-American before and, miraculously, I haven’t become anti-American since. In Guantánamo, I did see some people for whom jihad is life itself, people whose minds are distorted by extremism and whose souls are full of hatred. But the huge majority of the faces I remember — the ones that haunt my nights — are of desperation, suffering, incomprehension turned into silent madness.

I believe that a small number of the detainees at Guantánamo are guilty of criminal acts, but as analysis of the military’s documents on the prisoners has shown, there is no evidence that most of the 465 or so men there have committed hostile acts against the United States or its allies. Even so, what I heard so many times resounding from cage to cage, what I said myself so many times in my moments of complete despondency, was not, “Free us, we are innocent!” but “Judge us for whatever we’ve done!” There is unlimited cruelty in a system that seems to be unable to free the innocent and unable to punish the guilty.

But the New York Times does not tell you that the author comes from a whole family of terrorists who had transformed their bathroom into a chemical weapons laboratory!

This is something that you could have found if you did a simple search in Yahoo under the first listing, a Wikipedia profile:

Benchellali is the younger brother of Menad Benchellali, an alleged graduate of the Derunta training camp, who it is claimed, received chemical weapons training. Benchellali and an aquaintance Sassi are alleged to have traveled to Afghanistan on forged passports. Benchellali is reported to have directed Mourad, and a friend, Nizar Sassi, to go Afghanistan. Benchellali was transferred from US custody to French custody in July 2004.

And, then there is this on the Benchellali family and that odd bathroom they have at the family home:

First, the father. A pensioner who was indicted by antiterrorist Judge Jean-Louis Bruguiere, he was first a militant in Bosnia, and then he opened a prayer room on the ground floor of his apartment building. There he inflamed his audience with devastating sermons. The senior Chellali is a figure of the Minguettes district.

Next, the big brother. Menad is incarcerated in the framework of an investigation into “Chechen networks”, whose objective is to recruit combatants for Chechnya. Menad is charged in particular with having transformed the bathroom of the family residence into a chemical laboratory.

** But, the most astonishing thing is that the New York Times itself wrote about the terrorist brothers back in July 2004 (via FrontPage):

Web of Jihad Draws In an Immigrant Family in France

Menad, joined by yet another Benchellali brother, Hafed, was involved in a number of crimes, including payroll theft, according to The New York Times. [1] Hafed was involved with the Abu Musab al-Zarqawi network, which now leads the terror campaign in Iraq. Also according to the New York Times, “the police have found links between both Menad and Hafed and suspected terrorist cells in Spain and London, including one that succeeded in producing an undetermined quantity of ricin.”

When Chellali Benchellali moved to France 41 years ago his path seemed clear enough. Escaping the misery of his native Algeria, he hoped to get a job, marry, raise a family and blend into the French melting pot…

He got part way there. But for the last six months Mr. Benchellali has been in a high-security French prison along with his wife and two of his sons, all accused of helping to plot a chemical attack in the style of Al Qaeda in Europe. A third son has just been released from the American detention center at Guantánamo Bay, Cuba, one of four Frenchmen handed over to the French authorities this week.

Hafed sent a total of about $9,000 to Menad through Aslanbek Bagakhashvili, whom French antiterrorism officials identify as an associate of Abu Musab al-Zarqawi, widely viewed as the top Qaeda operative in Iraq today. Menad says he lived with Mr. Bagakhashvili in Georgia.

You
wouldn’t think that this Zarqawi linked terrorist would be the best source for an “innocent Gitmo detainee” opinion piece but agenda trumps truth at the New York Times!

Roger L. Simon writes that Mr. Benchellali and his beloved family were sentenced yesterday in France!
The Sundries Shack is a bit “miffed” to put it mildly.
Powerline has more on the 25 that were sentenced in France from today’s news.