Say what you must about US President George W. Bush…
This world will be hard pressed to find a future leader who will influence the growth of democracy more than the current US president.

It is a special weekend at Camp David as President Bush welcomes freedom of speech warrior and War on Terror ally Danish Prime Minister Anders Fogh Rasmussen to Camp David. 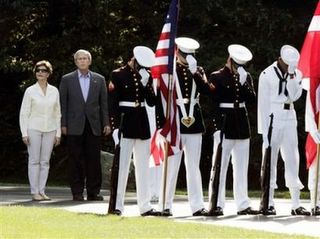 Anderson just visited Iraq to congratulate Prime Minister Maliki on the creation of his cabinet after enduring brutal attacks by radical Muslims in the previous months:

Fogh Rasmussen recently visited Baghdad to meet with the new Iraqi Prime Minister, Nouri al-Maliki, who told him that he is optimistic that Iraqi forces can take control of security throughout the country within 18 months.

The Bush administration was generally supportive of Denmark early this year during a controversy that erupted over the publication of cartoons in a Danish newspaper that many Muslims found offensive.

Amid furious anti-Danish demonstrations by Muslims in many capitals, Fogh Rasmussen resisted demands that he apologize, asserting that his country’s freedom of speech must not be compromised. 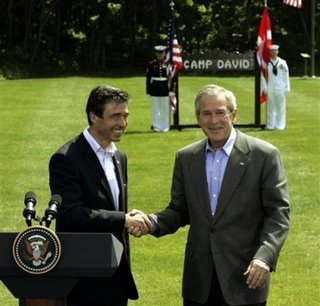 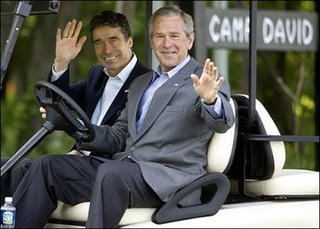 US President George W. Bush(R) and Danish Prime Minister Anders Fogh Rasmussen(L) wave from a golf cart at Camp David in Maryland. Bush told reporters the death of Al-Qaeda’s chief in Iraq, al-Zarqawi, in a US airstrike this week was a major blow to the country’s insurgency but “it’s not going to end the war.”(AFP/Paul J. Richards)

The Danish Parliament also recently approved keeping troops in Iraq to help with the situation:

Denmark has about 500 troops in Iraq supporting the U.S. commitment there and 360 more in Afghanistan as part of the NATO-led force. Danish officials note that their nation’s contribution of troops is substantial for a country with but 5.4 million people.

Public support for the commitment is 40 percent in Denmark, according to polls, compared with 72 percent two years ago. Still, the Danish Parliament recently approved the government’s plan to extend Danish participation in Iraq until June 2007. 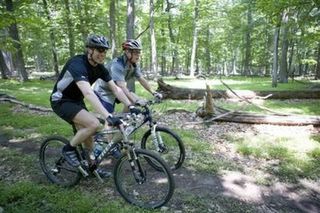 Two days ago, Bush looked ahead to the July 6 celebration and quipped: “It’s not that old, it really isn’t.”

But asked Friday whether he and Rasmussen would race during a mountain bike ride around this presidential retreat, Bush jokingly replied: “No, we’re old — one of us is old. I’m taking a lesson.”

Bush invited Rasmussen for talks on a wide range of subjects, including the war in Iraq, diplomacy with Iran, and efforts to end violence in Sudan’s Darfur region, but both leaders also looked forward to a spin around the grounds.

“Thanks for bringing such good weather. It was important to have good weather today, because the prime minister is going to give me a mountain biking lesson after this news conference,” said Bush.

“The health experts tell us that we need daily exercise. So before we even start thinking about lunch, I’m looking forward to exploring Camp David in even greater detail on (a) bike,” said Rasmussen.

President Bush spent his birthday with the Danish president last year in Denmark.