A St. Louis area woman was charged today with beating a dog breeder with a dead chihuahua puppy! 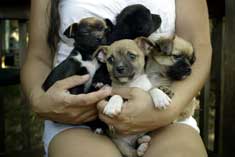 A St. Peters woman, who asked not to be identified, holds four of the remaining 7-week-old chihuahua puppies at her home.
(HUY RICHARD MACH/P-D)

An area woman was charged today in the dead chihuahua assault case:

A Wentzville woman accused of striking another woman in the head 30 times with a dead Chihuahua puppy has been charged with two misdemeanors.

Lisa Lynn Hopfer, 33, of the 200 block of Wildflower Ridge Drive, was charged with trespassing and third-degree assault.

Hopfer repeatedly hit the woman who sold her the dog because Hopfer was upset it had died, St. Peters police said.

Hulsey said she was relieved to hear that Hopfer would be arrested.

“I never, ever want to see that woman again,” Hulsey said.

Hopfer went to Hulsey’s home in St. Peters about 5:45 a.m. June 7. Police say she pushed her way in and began fighting with Hulsey and pulling her hair as she tried to make her way to the basement to get another puppy. Hulsey said Hopfer had Chloe in a plastic bag and hit her several times with the dog.

Hulsey said she was concerned that Hopfer was going to wake her four young boys and they would witness the attack. She managed to wrestle Hopfer out of her house, but on the front porch, Hopfer took the dog out of the bag and hit her over the head at least 30 more times with the dead puppy, Hulsey said.

As she pulled away, Hopfer waved the dead puppy out of the car’s sunroof and yelled, “She sold me a dead dog!” Hulsey said.