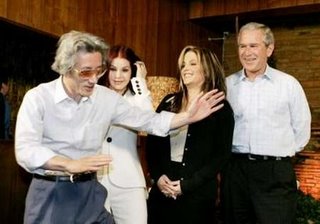 The Prime Minister was to recieve a lock of The King‘s hair as a present from the staff at Graceland:

Japanese Prime Minister Junichiro Koizumi has visited the home of his musical hero, Elvis Presley, as a guest of US President George W Bush.

Mr Koizumi burst into song with a few bars of “Love Me Tender” in the Jungle Room of Graceland on a private tour by the singer’s ex-wife.

Then, amid the Hawaiian-style furniture and a waterfall feature in the room where the King used to relax, Mr Koizumi serenaded the US president and his wife. 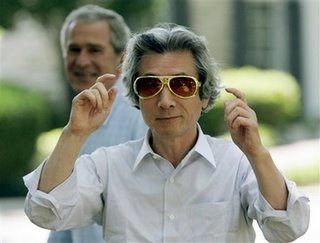 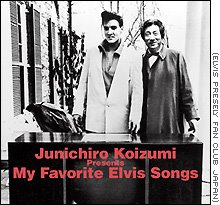 Elvis and Koizumi share the same birthday of January 8th.

Back in 1987… When Koizumi was a mere lawmaker, he and his brother Masaya, now a senior adviser to the Tokyo fan club, helped raise funds to erect a status of Elvis in the Japanese capital to commemorate the 10th anniversary of his death. 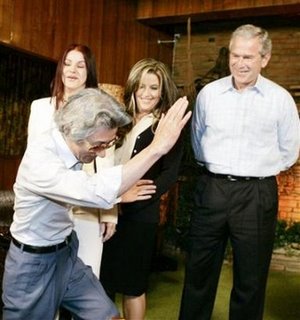 In the Jungle Room at Graceland. (Reuters)

Debbie Schlussel thought this was a pretty cool idea when it was announced.
Allah has a cool roundup.
Pajamas Media has more on the “Japanese Idol”.