Will the EU Welcome Turkey, Where 1 of 4 Accept Suicide Bombing?

The Pew Research Center released an interesting poll today on how westerners and Muslims view each other.

One strange finding from this report is that a majority of Muslims believe that Arabs are not behind the 9-11 attacks even after Osama Bin Laden has taken credit for the attacks on different video recordings.

But, here is concerning news for the European Community…

As Turkey is making plans to join the European Union, how will the EU feel about a country where 1 of 4 citizens believe that blowing up innocents is an acceptable practice? 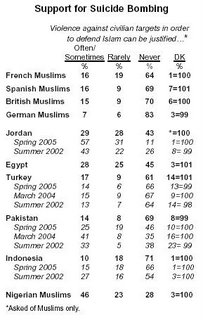 Another interesting finding from the poll…
It’s interesting what a difference a Zarqawi bombing makes! 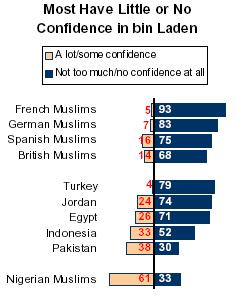 And, many Muslims still believe that terrorism is acceptable:

The belief that terrorism is justifiable in the defense of Islam, while less extensive than in previous surveys, still has a sizable number of adherents. Among Nigeria’s Muslim population, for instance, nearly half (46%) feel that suicide bombings can be justified often or sometimes in the defense of Islam. Even among Europe’s Muslim minorities, roughly one-in-seven in France, Spain, and Great Britain feel that suicide bombings against civilian targets can at least sometimes be justified to defend Islam against its enemies.