And… Where is the outrage? 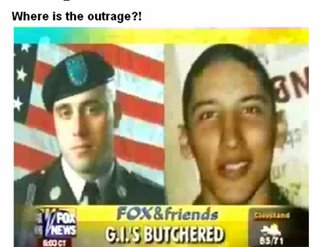 What really happened to Private Kristian Menchaca of Houston and Private Thomas Tucker of Oregon is beyond imagination!

** The O’Reilly Factor– Private Kristian Menchaca of Houston and Private Thomas Tucker of Oregon were captured by terrorists in Iraq, hacked to death, their eyes gouged, their bodies defiled. This was payback for the death of Zarqawi.

** The Australian– On the Fox News channel on Wednesday night, the normally measured Republican presidential contender Newt Gingrich spluttered with rage at those Americans who did not feel an overwhelming desire to “get revenge” for the deaths of privates Tucker and Menchaca, whose bodies were apparently dragged behind utility vehicles before being mutilated.

** The American Spectator– Pfc. Kristian Menchaca, 23, of Houston, and Pfc. Thomas L. Tucker, 25, of Madras, Oregon, were butchered by jihadist followers of the unlamented Abu Musab Zarqawi, their bodies left behind like common dogs. Their killers gloated on websites: “We give the good news … to the Islamic nation that we have carried God’s verdict by slaughtering the two captured crusaders.”

** The Republican– It took the search team 12 hours to reach Pfc. Kristian Menchaca of Houston and Pfc. Thomas L. Tucker of Madras, Ore., because soldiers had to make their way through numerous explosive devices set along the road and around the bodies themselves.

** Front Page– They had been so horribly mutilated with their eyes gouged out and their remains so desecrated a visual identification was impossible – DNA testing was needed in order to confirm their identities. CNN also reported that not only were the bodies booby-trapped, but homemade bombs also lined the road leading to the victims, an apparent effort to complicate recovery efforts and kill recovery teams.

** The Herald– “He was identified through fingerprints,” Esther Garcia, public affairs officer at Fort Sam Houston in San Antonio, told The Brownsville Herald.

** LA Times– “The two bodies, severely traumatized, were found bound together with an IED [makeshift bomb] between one of the soldiers’ legs,” it said.

** E.D. Hill (Fox and Friends video)- Hearts cut out. Their penises were cut off and shoved into their mouths, ears and noses cut off, while being tortured, and then finally killed!

The main stream media was OUTRAGED over the Abu Graib abuse photos, where U.S. Soldiers were sentenced to prison for 3 years, 6 years, 8 years, and 10 years, but virtually silent about the brutal TORTURE and beheading of U.S. Soldiers by al-Qaeda??!!

CNN ran the photos over and over again for weeks, while having “experts” on to discuss this “outrage” about Abu Graib??!!

Previously:
Al Qaeda Says It Is Holding Missing Soldiers
Pray For Pfc. Thomas Lowell Tucker & Pfc. Kristian Menchaca
No Gettysburg Address Required, But Say Something!
“Our Son Died for the Freedom of Everybody in the United States”
After Mutilation, Fingerprints Helped ID Soldier’s Remains
Russia Negotiating with Terrorists who Slaughtered US Soldiers
Moscow negotiates with GIs’ murderers –World Net Daily