Was it Russian Kalishnikov Rifles, a favorite Al Qaeda weapon, that killed the people of Haditha in November? 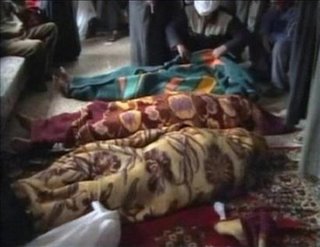 A November 2005 video still provided to Reuters by Hammurabi Human Rights group shows covered bodies, which Hammurabi says, are of a family of 15 shot dead in their home in Haditha, in western Anbar province, Iraq. U.S. Marines could face criminal charges, including murder, over the deaths of up to two dozen Iraqi civilians last year in Haditha, a defence official said on Friday, May 26, 2006. (Hammurabi Organisation via Reuters TV/Reuters)

The weapons used in Haditha were Kalishnikovs.
That is what a caller today said on the Sean Hannity radio program.
The military man who called in this afternoon said that the shells were from a Kalishnikov rifle and not a US made weapon from pictures taken in Haditha.

Of course, if this were proven it would certainly impact the story. 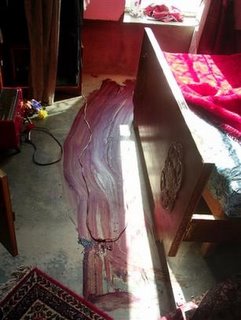 This image is believed to have been taken a day or two after the Haditha incident, and was made available in Baghdad, Iraq, Friday, June 2, 2006, by lawyer Khaled Salem Rsayef, but was not taken by him. (AP)

HERE is a video from vSocial that shows footage from Haditha.

Update: (Friday 6-16) The Army Maj. Gen. Eldon A. Bargewell completed his report on Haditha and passed it on the Lt. Gen. Peter Chiarelli, the second-ranking commander in Iraq. There is no word on when the information will be made public.