The new kingpins in Mogadishu wasted no time pushing Sharia law on the citizenry. Today they banned World Cup games from being shown in local cinemas. 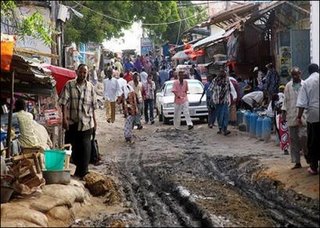 Hardline Islamic courts shut cinema halls and barred residents from watching the World Cup, prompting scores of civilians to protest the ban in which two people were killed, court officials and residents have said.

The gunmen loyal to the Joint Islamic Courts (JIC), cut electricity, cleared cinema halls and warned residents against watching the football tournament in areas they control, forcing a violent protest late on Saturday in which two people were killed, residents said Sunday.

The JIC deputy chairman AbdulKadir Ali Omar said the Islamic tribunals would crackdown on halls that defy the order to show western films and video, including the World Cup.

“This is war against all people who show films that promote pornography, drug dealing and all forms of evil,” Omar told AFP.

“We shall not even allow the showing of the World Cup because they corrupt the morals of our children whom we endeavour to teach the Islamic way of life,” he added.

Islamic courts officials said they were against some elements of World Cup, notably the advertisements for alcohol.

The BBC reports… This comes just a few days after the head of the Islamic courts militia, Sharif Shaikh Ahmed, said the Islamists had no plans to impose Islamic law in Mogadishu, and wanted the Somali people to decide their own future. 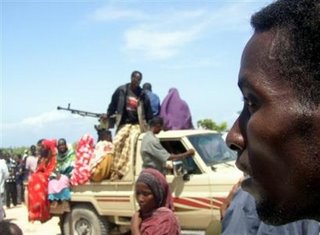 A Somali man stands in front of a machine gun mounted truck supporting an alliance of warlords, Thursday, June 8, 2006 during a rally against the Islamic courts in Karan in northen Mogadishu. Islamic leaders who seized Somalia’s capital after weeks of bloody fighting began talks Thursday with the U.N.-backed government that has so far failed to assert any real control over this lawless Horn of Africa nation. (AP Photo/Mohamed Sheikh Nor)

Catholicgauze at The Jawa Report has more on this tragedy.