THE LIFE AND DEATH OF ELIYAHU PINCHAS ASHERI, ZTK”L
BY: FERN SIDMAN 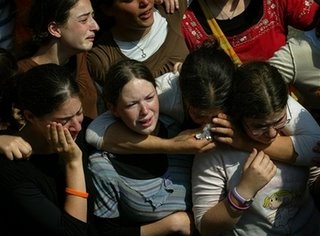 On this day, June 29th, 2006, the 3rd day of Tammuz 5766, the nation of Israel buried a true Eved Elokim, a faithful servant of the Almighty G-d of Israel. Today thousands of Jews across the State of Israel attended the funeral of 18 year old Eliyahu Pinchas Asheri, ZTK”L, the yeshiva student from the settlement of Itamar who was kidnapped and murdered by Arab terrorists. Asheri, a student at the pre-military yeshiva academy in N’vei Tzuf in the western Binyamin region was last seen at 9:00 p.m. on Sunday at the French Hill junction in northern Jerusalem. He was hitching a ride to his yeshiva in N’vei Tzuf.

His parents, Yitro and Miriam Asheri reported him missing on Monday, but according to reports from the IDF he had already been murdered by that time. According to Arutz Sheva, “A Ramallah Tanzim terror cell, taking orders from the Gaza headquarters of the Popular Resistance Committee, carried out the kidnapping and murdered of pre-military Torah academy student Eliyahu Asheri, according to the IDF.”

The report went on to say, “Itamar resident Eliyahu Asheri, z’l, died immediately when he was kidnapped on Sunday, according to OC Central Commander Yair Naveh. Naveh told reporters at a briefing on Thursday that the 18-year-old victim was not kept alive, as claimed by the terrorist group that abducted him, but was “without a doubt murdered immediately.”
Popular Resistance Committees terrorists claimed they had kept Asheri alive until Tuesday while considering the possibility of holding him for ransom. Said Naveh, “They had absolutely no intention to hold negotiations.” 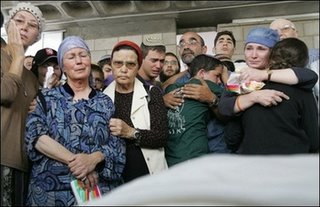 The mother (2nd L) and other family members grieve over the body of 18-year-old Eliahu Asheri during his funeral in Jerusalem. (AFP)

According to The Jerusalem Post, (6/27/06), “On Wednesday, elite police and IDF forces arrested Popular Resistance Committees operative Osam Abu Rajil, who was suspected to have been involved in the kidnapping. Abu Rajil led the forces to a mountainside north of Ramallah, where Asheri’s body was found buried, Army Radio reported. Naveh confirmed Thursday that Abu Rajil was personally involved in the kidnapping.

On Tuesday, a spokesman for the Hamas-affiliated PRC told Al-Jazeera that Asheri would be “butchered in front of TV cameras” if the IDF operation in Gaza did not stop. “Our patience is running out,” he said. “I am announcing for the first time that the kidnapped Zionist Israel is searching for is the same settler who is being held by us. He is aged 18-1⁄2… and is a soldier in a pre-military academy,” said the spokesman, who identified himself as Abu Abir.”

In addition, Arutz Sheva reported that, “The IDF did not say whether the assault rifles which the Olmert government and the United States transferred to PA President Mahmoud Abbas, (Abu Mazen) earlier this month were used at any point in the kidnapping or murder. WorldNetDaily reported in the name of “sources close to the Al Aqsa Brigades” that the guns had been used in two separate shooting attacks against Israelis within days of the transfer.”

Roads in Jerusalem were closed in honor of the funeral, which is to end with the youth’s burial in the Mt. of Olives cemetery. Eliyahu’s teachers and family, one after the other, spoke about what a sweet person he was. Over and over it was mentioned that Eliyahu’s prayers were “like fire.” 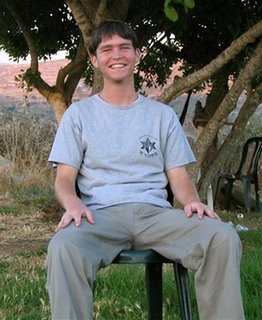 “You went up to Heaven in a storm, like Eliyahu (Elijah) the prophet,” Eliyahu’s mother Miriam eulogized, in a calm and determined voice. “Now, Eliyahu – stand before G-d and speak out in favor of the Nation of Israel – don’t let up until our Father in Heaven agrees to reveal Himself to His people.”

Yitro Asheri spoke of his son, recalling that he would always sit in their home and make peace between his siblings. “When you get to Heaven,” the Australian immigrant said, addressing his son, “make peace within our people and between the Nation of Israel and our Father in Heaven.”

Asheri added that the world has much less prayer in it now that Eliyahu is gone and implored all of Israel to “Pray! Pray – because you are righteous and G-d desires your prayers.”

Eliyahu’s mother Miriam told Voice of Israel Radio this morning, “At this time, I do have not much to say, for the pain is so unbearable; I can barely find a way to hold it. But one thing I can say is that many times in the past years, because of the many disagreements-between-brothers we have in this country, many times I asked G-d to give me, first of all, love in my heart for everyone. And now, following this terrible thing that happened to us, it has become clear to me how really great the Nation of Israel is – how much help we have received, and all the volunteers, and the army – there are no words to describe it… And this was the way of Eliyahu as well…”

Rabbi Chaim Druckman, the national head of the Bnei Akiva Yeshivot movement and Eliyahu’s adopted grandfather, said at the funeral that sometimes funerals are like sunsets, but that Eliyahu’s passing is like the sun going dark at noontime. “This is not just a private funeral, but one belonging to all of Israel,” he said. “His murderers intended to kill any one of us and all of us.”

Rabbi Avi Ronski, the Rabbi of Itamar and the man who has been tapped to become the next Chief Rabbi of the IDF, said at the funeral, “It is now clear that they murdered Eliyahu very soon after they kidnapped him, and all their announcements and threats afterwards were merely psychological pressure against us.”

The murder of Eliyahu Asheri comes on the heels of a Hamas terrorist attack several days ago when a Hamas 8-man force crawled through an underground tunnel into Israel, lobbing grenades and bombs at a military outpost killing two IDF soldiers, Lt. Hanan Barak, 20, from Arad and Sgt. Pavel Slutzker, 20 from Dimona A third soldier, Corp. Gilead Shalit from Mitzpe Hila was kidnapped.

The kidnapping of Corp. Shalit, prompted the IDF to launch its “Operation Summer Rains” offensive Wednesday with the entry of Israeli forces into Southern Gaza. The stated goal: The release of kidnapped solider Gilad Shalit.

In addition to knocking out electricity in much of Gaza, the operation has included an aerial missile attack on an electricity station south of Gaza City, aerial attacks on three bridges in the central Gaza Strip, over dry river beds, artillery fire at open areas in the southern Gaza Strip and entry of armored forces into the Dahaniya area, mainly the abandoned airport, where the IDF has set up a headquarters. This area represents a strategic control and observation point over the southern Gaza Strip.

In response to the murder and kidnapping, Israeli forces arrested one-third of the Hamas-led Palestinian Cabinet and 20 law
makers early Thursday and pressed their incursion into Gaza.

Today is a day of tremendous grief and mourning for the family and friends of Eliyahu Asheri. It is also a day of mourning for the entire nation of Israel. It is not easy to forget a day on which a young Jew was buried. A young Jew, heinously murdered by Arab savages. A Jew who feared G-d and walked in the way of his ancestors, in the way of Hashem’s holy Torah.
It will be difficult to forget the looks of profound grief and misery etched on the faces of his parents, his siblings, his friends and neighbors. The murder of Eliyahu Pinchas Asheri was the murder of a part of each and every one of us. For the murder of Eliyahu Pinchas Asheri could have been the murder of our own son or brother. Ask any parent that has lost a child and they will tell you that they never get up from sitting shiva. The sadness and despair is all consuming and does not diminish with the passing of time.

We are commanded by the Almighty G-d of Israel to be our brother’s keeper, for we are all one nation, a collective body and soul. When one of us grieves and suffers, we all grieve and we all suffer. Today we have lost a brother and our tears flow freely and without respite. And we ask, why was Eliyahu Asheri murdered? Why was it he that had to spend his last moments on this earth as a captive of barbaric Arab terrorists who have no respect for the sanctity of life?

We can blame a government of Israel who oppresses the free speech of Jews who oppose the Olmert convergence-realignment plan. We can point our fingers in outrage and indignation at a government who is bent on national suicide. A government comprised of spiritually bankrupt leaders that lead us to believe that genuine and long lasting “peace” can come to fruition with an enemy that has sworn our destruction. An enemy who interprets territorial compromise and conciliation as acts of weakness and surrender and who respond with even more contempt and disdain.

It is true that the government of Israel is one that is devoid of belief and faith, true belief and faith in the G-d of Israel and Torah. It is a government that has elevated the concepts of a westernized democracy into their own personal god. A government that displays a callous disregard when Jewish blood is spilled. We must express our anger and our outrage and rise up in indignation at the actions of a government who is responsible for the murder of our brother, Eliyahu Pinchas Asheri. For Eliyahu’s murder can be harbinger for the potential murders of our own brothers.

Let us raise our collective voices in prayer and supplication to the Almighty G-d of Israel. Let us plead with Hashem to give us the strength, courage, fortitude and tenacity to oppose a government that does not protect its people. Let us beseech the Almighty to provide comfort, strength and courage to the Asheri family and to all of the nation of Israel, for on this day, a part of each and every one of us has died.

Thank you Fern Sidman for this tribute.