The disgusting communist gals at Code Pink are up to more than just publishing anti-American occupation ads in Iraqi papers!

Pictured below, the twisted communists from Code Pink pose in front of an Iraqi refinery on one of their Saddam supporting tours one month before the War in Iraq. 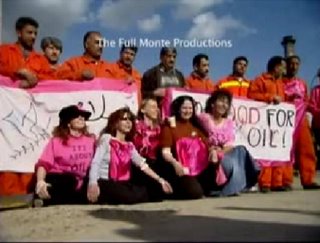 This picture and video attributed to The Full Monte

Here is the video of Code Pink in Iraq before the war.

TGSLTakoma put together an excellent summation of one of the most dangerous Leftist groups in America and the numerous democratic supporters in their ranks:

Once International ANSWER’s reputation was known, other leftist groups were just waiting in the wings to step into the forefront; it’s almost like a relay race. Fidel Castro groupie, Medea Benjamin’s Global Exchange formed two radical front groups, United For Peace and Justice (UFPJ), led by the communist Leslie Cagan, and Code Pink Women for Peace. As a smaller group more focused on colorful media stunts, Code Pink has been able to operate without the need for large masses of people. UFPJ became a leader in organizing “antiwar” rallies and marches, but soon they were also exposed, and infighting among the communist, socialist, marxist groups took a lot of wind out of the movement.

Like the cockroach, they have evolved. And they have enlisted significant supporters within the Democrat party, including but not limited to: John Murtha, Lynn Woolsey, Howard Dean, John Conyers, Maxine Waters and Sheila Jackson Lee.

Earlier this year they brought in a group of “Iraqi” women, some of whom don’t even live in Iraq, to travel across the USA speaking out against the “US occupation” of Iraq. One of the women, former Iraqi Baathist government employee Eman Ahmed Khammas, told stories to captivated audiences of gullible leftists about American soldiers torturing all Iraqi prisoners, wantonly murdering women and children, and destroying schools, hospitals, homes and mosques. 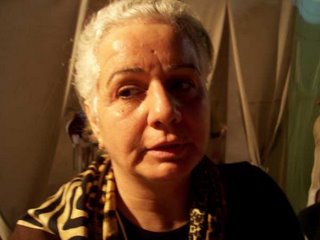 Before she came to the US Eman Ahmed Khammas, a former Baathist, worked for Medea Benjamin’s International Occupation Watch Organization out of Baghdad.

They have ratcheted up their war on the USA. They are trying to turn this into another Vietnam. And this time, should we “lose”, the stakes are much higher.

We cannot ignore them and hope they go away.

They have money, a sympathetic media and numerous Democrat/liberal/leftist politicians at their service.

TGSLTakoma also has video taken by Code Pink before the fall of Saddam Hussein and their deceitful and disgusting Fallujah film.

This news from TGSLTakoma is also cross posted at Free Republic.