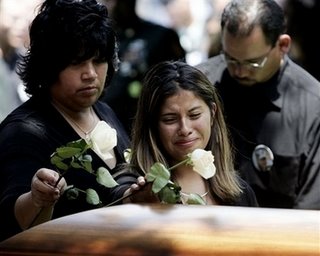 Christina Menchaca, 18, center, joins other family members in placing roses on the casket of her husband, Army Pfc. Kristian Menchaca, at his funeral in Brownsville, Texas, Wednesday, June 28, 2006. (AP) 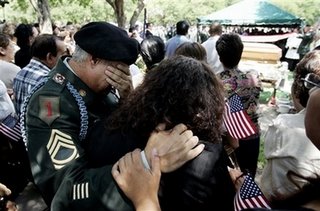 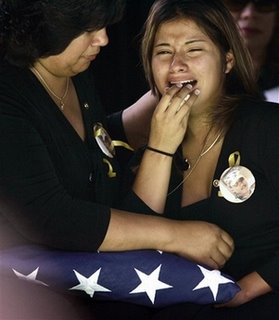 Christina Menchaca, 18, right, is comforted by her mother as the casket of her husband, Army Pfc. Kristian Menchaca, is lowered at his funeral in Brownsville, Texas, Wednesday, June 28, 2006. (AP)

Much more on Private Kristian Menchaca of Houston and Private Thomas Tucker of Oregon here.

Update: I’ve been following the story of these brave soldiers and how they were so horribly slaughtered. I see this and feel so angry that President Bush does not say anything about their barbaric deaths! I am just dumbstruck. When there are so many people who do not understand what kind of animals we are fighting, the president is silent on this slaughter?

Powerline has thoughts on how to deal with terrorist thugs like the ones who killed these good US soldiers.