The Telegraph released pictures on Sunday of the suspected Iranian weapons used to kill Allied soldiers in Iraq:

The first picture of an Iraqi insurgent mine, believed to have been responsible for the deaths of 17 British soldiers, has been obtained by The Sunday Telegraph.

The device, which has been used by insurgents throughout Iraq since May last year, fires an armour-piercing “explosively formed projectile” or EFP, also known as a shaped charge, directly into an armoured vehicle, inflicting death or terrible injuries on troops inside. 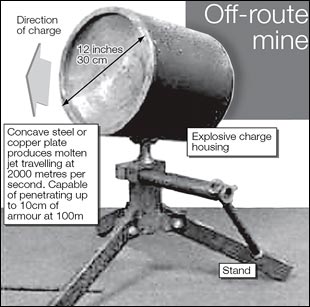 British military sources believe the devices have been developed in Iran and smuggled across the border into Iraq where they are supplied to Iranian-backed anti-coalition insurgents.

The weapon first emerged on the Iraqi battlefield in May last year and since then it has been used more than 20 times to kill 17 British servicemen. The last two soldiers to be killed by the device were Lieut Tom Mildinhall, 27, and L/Cpl Paul Farrelly, 28, both members of the 1st Queen’s Dragoon Guards, who were killed on May 28 in a district north-west of Basra.

Also in the news, Iranian President Mahmoud Ahmadinejad is planning to visit neighbouring Iraq soon it was announced today.