A St. Louis Post Dispatch reporter was arrested outside of the funeral of Ladue native and Clemson student Tiffany Marie Souers on Thursday. After a tussle, the reporter, Margaret Gillerman, 54, of University City, is “accused of” striking the arresting officer: 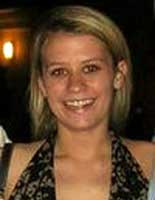 Police said Gillerman was escorted from Church of the Annunziata by a lieutenant who told her church officials had banned media, but that she later returned to the parking lot. Gillerman said she had been permitted to attend the service and has “felt very welcomed by the family” while covering them.

Ladue Police Chief Greg Wurm said admitting reporters was up to church officials, not the family.

Wurm said Gillerman later resisted arrest and struck an officer booking her into the city lockup. Gillerman said the allegation of assault was unfounded and said she had been treated roughly, which left bruises. Wurm said his officers acted appropriately.

Authorities may have a suspect in the brutal killing of the popular St. Louis area university student.