Ann Coulter made George Carlin move to the right on Leno,
VIDEO HERE

The video was put out by the AP so, of course, Coulter’s best lines were cut out. 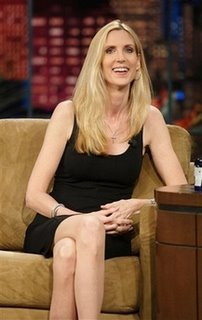 In this photo released by NBC Universal, host Jay Leno, not seen, speaks with Ann Coulter during taping of ‘The Tonight Show with Jay Leno,’ on Wednesday, June 14, 2006, in Burbank, Calif. (AP Photo/NBC Universal, Paul Drinkwater)

There were a few sparks but no fireworks last night on Leno between Ann Coulter and ultra-liberal George Carlin. World Net Daily did catch a number of Ann’s best lines from the evening:

Coulter is the first publicly to take on the New Jersey widows who pushed for an independent commission to investigate the Sept. 11, 2001, attacks. The women also backed Democrat John Kerry’s presidential candidacy in 2004.

“These broads are millionaires, lionized on TV and in articles about them, reveling in their status as celebrities and stalked by grief-arazzis. I’ve never seen people enjoying their husbands’ deaths so much,” Coulter wrote in “Godless.”

Leno asked, “Is the point of the book to move forth your conservative ideas – what you think – or is it to sell books?”

“It is to make a point, and now that it is the No. 1 book in the country, I think that point will be made,” Coulter said to loud applause. “The funny thing about this is I’m calling liberals ‘Godless.’ Oh, they’re cool with that. Just don’t attack the Jersey Girls.”

Leno asked why Coulter used the term “broads” to refer to the widows in her book, while calling them “women” during a previous television appearance.

“Men use the word ‘broads’ all the time to talk about women,” Coulter responded. “If we’re getting to that level of parsing my language, there will be no end to this.”

“Liberals love to boast that they are not ‘religious,’ which is what one would expect to hear from the state-sanctioned religion,” Coulter writes in what may be her most controversial book yet. “Of course liberalism is a religion. It has its own cosmology, its own miracles, its own beliefs in the supernatural, its own churches, its own high priests, its own saints, its own total worldview, and its own explanation of the existence of the universe. In other words, liberalism contains all the attributes of what is generally known as ‘religion.'”

No wonder they hate her so much!

Update: Freepers indeed! The good folks from Free Republic showed up for the event. HotAir has much more.

And, if she has not stirred up enough hate in the mainstream already, Ann Coulter led off with this in her column this morning:
Party of Rapist Proud to Be Godless