The Brit behind the “Spanish National Anthem” brought his group, Voz a Voz, and a group of children singers to Ellis Island to give its first live performance of ‘Nuestro Himno’ yesterday.

Video from the debut at Ellis Island Here. 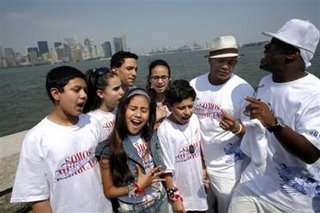 David Rosario, third from left, Gio Doleo, second from right, and Ammy Acosta, far right, of the Dominican vocal group Voz a Voz, and members of Reggaeton Ninos perform a Spanish-language version of the U.S. national anthem entitled ‘Nuestro Himno’ during an event at Ellis Island Tuesday, May 30, 2006 in New York. The song, which now has a music video and will be released on the upcoming compilation album ‘Somos Americanos’ or ‘We Are Americans’, has drawn criticism from some who believe the national anthem should be sung only in English. (AP Photo/Jason DeCrow)

Yesterday was the live deput of “Spanish National Anthem” at Ellis island of all places:

“We chose Ellis Island because of the obvious symbolism it has for the whole American immigrant experience,” said New York-based British music producer Adam Kidron.

Kidron, 46, provoked a heated debate last month when his recording label, Urban Box Office (UBO), released “Nuestro Himno” (Our Anthem), a Spanish version of “The Star-Spangled Banner” which he hoped would become a rallying song for protest marches against immigration reform.

Tuesday’s event coincided with the launch by UBO of an album “Somos Americanos” (We Are Americans) which features the anthem and other songs about the immigrant experience by artists from across the United States and Latin America.

“Nuestro Himno” became the target of angry criticism on its release, with US President George W. Bush echoing others who argued that the national anthem should be sung in English.