The four kidnapped Russian diplomats in Iraq were slaughtered by the Mujahedeen Shura Council, the same group that took credit for the slaughter of Private Kristian Menchaca of Houston and Private Thomas Tucker of Oregon.

The Russian diplomats were slaughtered -despite- Russia’s refusal to support the War in Iraq. 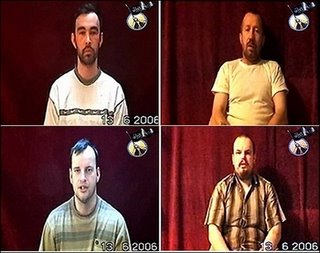 A combo picture grabbed from a video released by the Mujahedeen Shura Council in Iraq, on the internet, shows the Russian diplomats abducted on June 3, when gunmen attacked their vehicle in the upmarket west Baghdad neighborhood of Mansur. An Iraqi insurgent coalition led by Al-Qaeda said today it had executed four Russian diplomats held hostage in Iraq, in an internet statement accompanied by pictures.(AFP/MUJAHEDEEN SHURA COUNCIL )

The Mujahedeen Shura Council posted a video on the internet Sunday showing the execution of three Russian embassy employees. A fourth employee, not shown on video, was also reported killed. On June 3, a car the four were traveling in was ambushed by insurgents in Baghdad at which time one Russian diplomat was killed.

ORISH also has video of the slaughter.

Russian authorities reported Friday that they were negotiating with the Mujahedeen Shura Council. World Net Daily had more on this.

The terrorists claim the beheadings were revenge for the torture and killing of Isalamists by Russia… sick:

In the footage, two men clad in black and wearing black ski masks shout “God is great!” before beheading the first man. Then one militant appears standing over the decapitated body of a second victim lying in a pool of blood, with the head placed on top of the body.

The footage of the beheading victims shows a closed room with white walls. The shooting appears outdoors in what looked like an alley between buildings.

The footage was stamped with the logo of al-Qaida.

“God’s verdict has been carried out on the Russian diplomats … in revenge for the torture, killing and expulsion of our brothers and sisters by the infidel Russian government,” the statement said.

The video begins with a verse from the Quran appearing in white letters on a black screen, and a voice reading “Those who aggress on you, you aggress on them.”

The Mujahedeen Shura Council took credit for kidnapping Private Kristian Menchaca of Houston and Private Thomas Tucker of Oregon near Youssifiya. However, the terrorists never released video or photographs of the torture and death of the two American soldiers.

The Chechan terrorist supporting KavKaz Center website has news of this Russian slaughter up on their site, but no news on the slaughtered Americans.

Michelle Malkin has a roundup on this latest Islamic slaughter.