Disturbing news continues to leak out of Iran about the Azeri protests in the northwest region. AzerNews reports:

The number of ethnic Azeris detained in the ongoing mass protests in Iran has reportedly reached 14,000, while those injured in clashes with the police topped 1,000, and the death toll has climbed to 42, says a member of the organization advocating for the rights of Azeri residents in the neighboring country.

“The heavily injured people hospitalized after the clashes were later moved to military hospitals, with no information on their fate available,” Javidan Elbars of the South Azerbaijan National Protection Committee told a roundtable, “South Azerbaijan: today and tomorrow”, on Friday.

Elbars said the Iranian authorities arrest the most active participants of the national resistance movement.

“Some of the arrested people have died in jails as a result of torture. Besides, the bodies of the active protesters are being found in the cities, on roadsides and lakes. The bodies of four people were discovered in the Shah Lake in one day. The authorities throw the bodies of the killed people into streets, claiming that they had been killed in car accidents while intoxicated.” 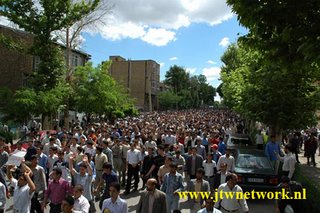 Thousands protested against the regime in the northwest this month. Hundreds were arrested and their have been several reports of death from the crackdown by the regime.

An 80 year old Iranian man was killed in Orumieh by security forces during protests this last week:

An 80-year-old resident of Orumieh, Ayvaz Sayadi, was wounded by the suppressive forces of the mullahs’ regime in the uprising by the people of that city last week. He later died in hospital.

The Iranian Ministry of Intelligence and Security (MOIS) has taken written assurances from Mr. Sayadi’s family not to publicize his death and limit attendance at his funeral to only close relatives.

Raids on people’s homes by the regime’s suppressive forces continue in Orumieh and other cities in Iran’s Azeri provinces.

The regime’s brutal MOIS agents severely torture the detainees to extract false confessions that they had been “seduced” and directed by “foreigners.”

There is a large womens rights rally scheduled for today in Tehran. Rooz News has the details.