Not surprising really, a major initiative is underway by radical Islamists to establish a new caliphate in the North Caucasus region of Dagestan. 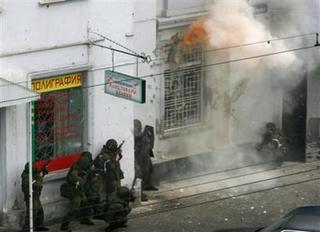 Russian special forces hide while they throw a smoke grenade outside a store, where hostages were held, in Nalchik, southern Russia , Friday, Oct. 14, 2005. Security forces freed seven hostages who had been held by Islamic extremists in a police station and a store, trying to snuff out the last resistance by rebels who launched simultaneous attacks on police and government buildings across this turbulent southern Russian town in the most extensive terrorist assault ever carried out on a whole city . (AP)

12 civilians, 24 Russian security forces and 91 radical Islamic terrorists were killed in the siege. 36 were arrested.

A reporter for the APA news network who wrote about the radical Wahhabites plans to build a caliphate in Dagestan is now being stalked for publishing this news of their plans:

In May, Abdul Umarov reported that radical Wahhabites are going to establish a caliphate (kingdom) in the North Caucasus consolidating northern regions of Azerbaijan, and they will be headquartered in Nalchik for a temporary period.

An unnamed religious man from Mahachkala told that after the disclosure by Umarov, the radical groups decided to kill him. The sources also said the bureau correspondents are also being searched.

A person of Arabic origin visited Azerbaijani northern region of Guba-Khachmaz to collect information on our Agency’s correspondents in the region as well as in Dagestan. He was accompanied by a religious man from Zagatala and a woman with wearing a head-scarf. The woman is reported to be from Zagatala-Balaken region. 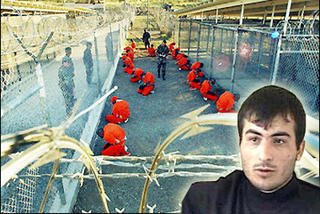 One of the 36 arrested radical Islamists at the Nalchik attacks in October was Russian Rasul Kudayev, a former Guantanamo detainee. (MosNews)