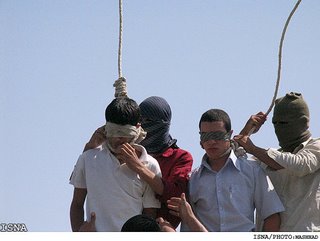 Or Does It Explode has this news on the Pet Shop Boys.

Mahmoud Asgari and Ayaz Marhoni were Iranian Arab teenagers from the province of Khuzestan who were hanged in Edalat (Justice) Square in Mashhad, northeast Iran, on July 19, 2005. The teenagers’ crime was being gay, although the Iranian regime added trumped up charges.

Pajamas is carrying the news.