The parents of Pfc. Tucker spoke about their son this morning,
Oregon KATU has a video from the heroes hometownHERE 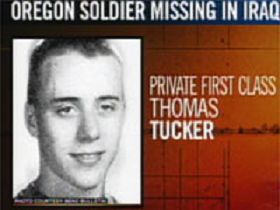 The body of Pfc. Thomas Tucker was found yesterday in Iraq. He had been barbarically tortured.

The parents of Pfc. Thomas Tucker spoke to the local media this morning:

“Our son, as far as we’re concerned, he has died for the freedom of everybody in the United States,” Tucker’s father, Wes Tucker, said in an interview on Wednesday.

He talked with pride about his son’s enthusiasm and devotion to his work, but while he was grieving, he said he also understood that his son was a soldier in a war.

His mother, Margarett Tucker, said the work was important to her son.

“That was very important to him, that people look up to him and know that he had done something worthwhile,” she said.

A few days before he died, she said, they talked by telephone and she urged him to get enough sleep.

Please keep the Tucker family and the Menchaca family in your thoughts and prayers.

NewsBusters has more on the Tucker family and sadly how the media spins their propaganda into the story.