With the passing of the al Zarqawi in Iraq and the new tape released by Al Qaeda leader Osama Bin Laden yesterday, one argument is settled once and for all- “Al Qaeda was and is very much alive and at work in Iraq.”

It looks like a pretty clear Al Qaeda connection here in this video tribute. 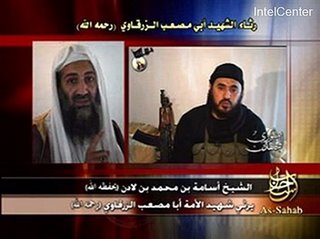 This image from yesterday’s video, shows an undated still photo, left, of Osama bin Laden alongside a video of the late chief of al-Qaida in Iraq, Abu Musab al-Zarqawi. (AP)

“Our dear Muslim nation, we were deeply saddened by the passing of our loved ones, Abu Musab and his companions. But we were very happy that their souls have flooded these great battles as they were defending the Islamic law… We were very happy to find in him a symbol and role model for our future generations.”

“Our Islamic nation was surprised to find its knight, the lion of jihad (holy war), the man of determination and will, Abu Musab al-Zarqawi, killed in a shameful American raid. Even if we lost one of our greatest knights and and princes, we are happy that we have found a symbol for our great Islamic nations, one that the mujahedeen will remember and praise in poetry and in stories secretly and aloud.”

It is now known that not only was Zarqawi in Iraq prior to Operation Iraqi Freedom, but that his successor has been operating in Iraq even longer:

Egyptian-born Abu Ayyub al-Masri– who was named in a most-wanted list issued in February 2005 by the U.S. command and has a $50,000 bounty on his head– would likely take the reins of al-Qaida in Iraq.

He said al-Masri and al-Zarqawi met for the first time at an al-Qaida training camp in Afghanistan in 2001, and al-Masri came to Iraq first. Al-Masri is believed to be an expert at making roadside bombs, the leading cause of U.S. military casualties in Iraq.

Unlike the offensive and false accusations from the left, high level Al Qaeda operatives including Al Zarqawi have been operating out of Iraq for years before the war to oust Saddam even began… And, yesterday Bin Laden praised those operatives himself.

Bin Laden also ordered Representative John Murtha and his fellow democrats to push harder with their “cut and run” plan:

“We will continue to fight you and your allies everywhere, in Iraq, Afghanistan, Somalia and Sudan to run down your resources and kill your men until you return defeated to your nation.”

Or, to Okinawa, anyway!

Also… HotAir has an amazing Vent today, “Changing Times”, by Bryan Preston on the mainstream media’s shameful assistance to the Al Qaeda killers.