Despite the headlines yesterday, violent crime in the US remains below levels in the 70’s 80’s and 90’s and below that of Europe, Canada and Australia. 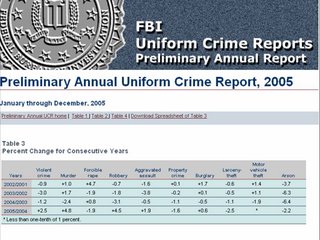 From the FBI uniform crime reports.

Violent crime in 2005 increased at the highest rate in 15 years, driven in large part by a surge of killings and other attacks in many Midwestern cities, the FBI reported yesterday.

The FBI’s preliminary annual crime report showed an overall jump of 2.5 percent for violent offenses, including increases in homicide, robbery and assault. It was the first rise of any note since 2001, and rape was the only category in which the number of crimes declined…

…Criminal justice experts said there were a number of possible explanations for the increase, including an influx of gangs into medium-size cities and a predicted surge in the number of inmates released from U.S. prisons. The jump could also represent a lingering effect of the Sept. 11, 2001, attacks, some experts said, because governments at all levels have diverted resources away from traditional crime fighting in favor of anti-terrorism and homeland security programs.

Among violent crimes, the biggest rise in 2005 came in the number of homicides, which leapt 4.8 percent, to nearly 17,000. Some of the hardest-hit cities included Milwaukee (up 40 percent), Cleveland (38 percent), Houston (23 percent) and Phoenix (9 percent).

On a regional basis, the increase disproportionately hit the Midwest. Total violent crime reports there surged 5.7 percent — at least three times the rate in the Northeast, South or West.

Notice the report says that violent crime increased at a high rate. What it fails to tell the public is that the US crime rate is still below what it was in the 70’s, 80’s and 90’s. You would think the FBI would want to mention this since it would be good PR for the agency?

Drudge Report reported that there were 16,912 murders in the US last year, 20 times as many deaths as US fatalities in Iraq. 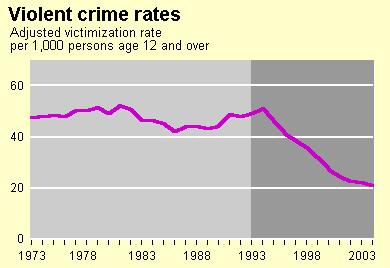 And, of course, the Left is running with this news! Too bad NOT ONE of these Leftist sites are correct:

(Actually, the truth is that we are safer and it is a feather in the cap of the Bush administration)

Wrong- The All Spin Zone is All Wrong!
Wrong- The Reaction is over-reacting.

Don’t expect the Left to apologize.

Previously:
After 45,000 Torched Vehicles in ’05, France Has Itself a Crisis