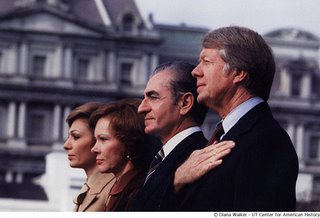 Jimmy Carter and the Shah of Iran
The current Iranian regime has a history of faithful Leftist support.

Much to the surprise of the Ayatollah’s leftist backers, during his first two years in power, Khomeini had most of his secular and religious opponents executed.

This Iranian does not want to hear another word of Jimmy’s idiocy.

And, here is more on Karl Vick, the Ahmadinejad apologist at the Washington Post.
Ayla writes in:

Thank you for updating the debunking of the latest barbaric Regime’s propagandist-for-hire, Karl Vick. His miserable attempt to portray “Adolf-Nezhad” as a caring President was truly mind-numbing and repugnant.

It is astounding how the left has decided to join forces with the most rabid fundementalist who are diametrically opposed to everything these moonbats hold so dear.

This also mirrors how the left in Iran aligned itself with the Ayatollah Khomeini during the revolution in 1979. Many of Khomeini’s political and religious ideas were considered to be progressive and reformist by leftist intellectuals and activists prior to the Revolution. Guess what happend to all those leftists? More than 12,000 were executed within a period of one month in 1986/1985? in the infamous Evin prison.

It’s a sick display of the left’s lack of moral conviction. They are afraid if they reported the truth about Iran, it would contribute to demonization of Iran and the subsequent build up of a case for invading.

One would think, possibly reporting this unrest will make military/sanctions even less necessary, if it is possible that the Iranian regime will collapse internally.

Here is testimony from a survivor of the regime’s wrath against its own people reported at Iranian Voice:

In the summer of 1988, the Iranian regime executed thousands of political prisoners. [According to some estimates, 30,000 political prisoners were executed over a few month period.] My younger brother was one of the ones killed. [She pointed to a picture of him that she brought with her. The family resemblance was obvious.] In our small city, 30 people were executed each night. The whole community was in mourning, but they wouldn’t return the bodies to the families. They buried them in a mass grave. We were not permitted to mourn. No one could visit the families or talk about what happened. My brother had a four-year-old daughter. Every day, she asked me where her father was. I told her that he had gone to the sky and at night she looked into the sky trying to find her father.

Yet, even today, there are those who believe that we should be taking advice from Jimmy Carter on Iranian policy (Via Glenn Reynolds):

His (Jimmy’s) comments are significant, given that he was the president when US relations with Iran hit an all-time low.

Isn’t that the Definition of Insanity?