High turnout is expected today as Kuwaiti women become the first women in any Gulf Arab state to be allowed to vote in national elections. 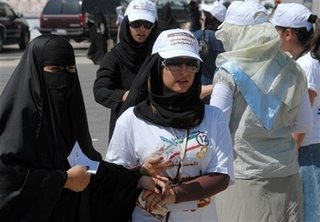 An election campaign volunteer, center, helps an elderly Kuwaiti woman voter, left, into a polling station at Salwa, Kuwait City on Thursday, June 29, 2006 during the country’s parliamentary elections, the first to include women. (AP Photo/Gustavo Ferrari)

Kuwaiti women today made history as they became the first women to vote in Parliamentary elections for any Gulf Arab State:

The polls marked a new stage in the U.S. ally’s tentative moves toward greater democracy – and not just because of the entry of women. The election brought unprecedented political activism in a country where the ruling family has strong influence over politics, with conservative Islamists joining liberals in demanding electoral reform and protesting corruption.

Women, who won the right to vote and run for office last year, went to separate polling stations from men, choosing among 252 candidates competing for 50 parliamentary seats. Twenty-eight candidates were women.

“Before, election day did not mean anything to us,” said Gizlan Dashti, 22, a university student wearing jeans and a red headscarf. “Now, women have a say.”

With women making up 57 percent of Kuwait’s electorate of 340,000, even fundamentalist Muslims who opposed giving them the right to vote have campaigned for their support.

Women voters were greeted at the polling stations with roses and umbrellas to block the sun. 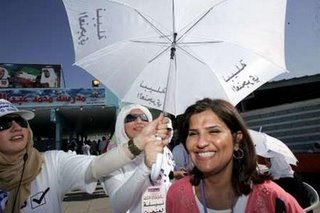 Nabeela Al Anjari an economist and a candidate running for a seat in Kuwait’s parliament smiles as she arrives at a polling station in Kuwait June 29, 2006. Kuwaitis voted for a new parliament on Thursday with women running and casting ballots for the first time in a national poll in the Gulf Arab state. (REUTERS/Zohra Bensemra) 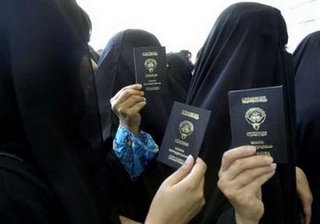 Voters hold their identity cards as they wait to enter polling centre to cast their votes in the 13th constituency of Roumaithiaon in Kuwait June 29, 2006. (Reuters)

The Washington Post gives more background on this landmark election in Kuwait.

Update: Jewaira tells of her experience today voting in Kuwait: “On June 29th 2006, I voted for my choice of parliamentary candidates for the first time…”